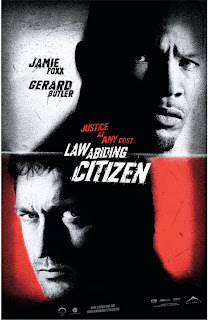 I saw Law Abiding Citizen over the weekend, a movie directed by F. Gary Gray. It tells the story of one Clyde Shelton, played by Gerard Butler, whose home is invaded by a couple of thugs who wound him and gratuitously murder his wife and infant daughter.

Although caught and put on trail one of the killers subsequently cheats the death penalty by giving evidence against the other, in a self-serving deal cut by Nick Rice, the prosecutor, played by Jamie Foxx. Shocked by this perceived betrayal, by this mockery of justice, Shelton pleads with Foxx to pursue the case against Clarence Darby, the informer, played by Christian Stolte, who is in fact the principal killer.

Rice, who remains emotionally unengaged in his professionalism, says that it does not matter what is right; it only matters what can be proved in court and that’s how the criminal justice system works. Shelton later sees Rice shake hands with Darby, convicted of third-degree murder, an action which compounds his sense of betrayal. This is a key scene and, in a sense, the beginning of the absurdity. I simply cannot conceive of Rice who, while coolly detached and methodical, is an essentially decent man, shaking hands with a character as loathsome as Darby, no matter the circumstances.

What follows, though ten years after, is a campaign of revenge, not just against the killers, but against the whole justice system, increasingly gothic, and increasingly ludicrous, in its intensity. The premise is good: that an ordinary citizen can be frustrated by the cynicism and compromises of the law. The conclusion is ridiculous: that this same citizen has the capacity and the expertise to turn the system inside out, hitting out at targets without proportion or discrimination.

It’s torture porn, violence for the sake of violence. All the sympathy I had for Shelton at the beginning was exhausted by the end. Still, it’s as well to see this movie as a kind of symptom, perhaps like the earlier Death Wish, a sign that the law is often perceived to be serving its own ends, not the ends of justice. The law was built to replace more primitive forms of revenge and vendetta. If it turns into a something else, a means by which people often escape the consequences of their actions through procedural loopholes and shabby compromises, then the urge for revenge and vendetta will once again take its place.