George Orwell on the Road to Damascus 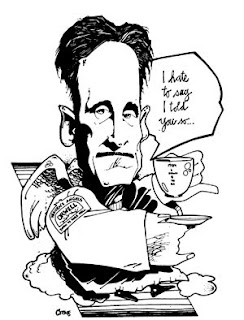 A day or two before the conclusion of the Nazi-Soviet Pact George Orwell had a dream. I imagine lots of other people had the same dream at the same time, one clearly born of acute anxiety. Of his particular dream Orwell later wrote:

What I knew in my dream that night was that the long drilling in patriotism which the middle classes go through had done its work, and that once England was in a serious jam it would be impossible for me to sabotage.

It was his intention, if he could, to fight; he no longer wished to sabotage. Sabotage? A rather odd choice of word, don't you think? Sabotage what, exactly? But you see that is exactly what he had planned to do, to sabotage a 'capitalist' war in a rather school-boyish cloak-and-dagger fashion. I'll come on to this in a bit but I should begin with a word or two about Orwell's political development in the period leading up to the Second World War.

Having served in Spain on the side of the Republic he came away with the abiding and deepening conviction that Communism was not just a lie but a murderous lie, one that would pervert even the simplest of truths-even language itself-to achieve its ends. Even so he still held to a form of socialism which placed no faith at all in 'bourgeois' democracy, which in his view was just another lie, one that would always lead to fascism, even in England. For him democracy and fascism were as 'Tweedledee and Tweedledum', a view he had expressed in 1937, the same year that he said that the 'moneyed classes' might very well trick England into a new 'imperialist war.'

So, while even some committed pacifists, members of the Peace Pledge Union, were opening to an understanding that the only way to resist Hitler was by violence, Orwell was opposed to any notion of a broad political front in favour of war; not exactly pacifism, just intense hostility to a particular kind of war. Also, it has to be said, he was deeply hostile to any notion of a 'popular front', another legacy of his Spanish experience.

I imagine those who have read this far are slightly frustrated by my failure to mention just exactly what form his proposed anti-war sabotage would take. Well, here we go! The details of what follows are all in volume one of The Collected Essays, Papers and Journalism.

There you will find open sentiments of his continuing opposition to war throughout 1939. In Not Counting Niggers, an essay published in the Adelphi in July, he calls for the creation of a mass party to oppose war, a sort of anti-Popular Front. It was this campaign of opposition by print that he believed would be threatened as war came closer. There are several references in his private correspondence on the need to prepare for an 'underground campaign', to prepare a secret printing press and the like, with financial support from sympathisers. The following is fairly typical of his mood and outlook;

I believe it is vitally necessary for those of us who intend to oppose the coming war to start organising for illegal anti-war activities. It is perfectly obvious that any open and legal agitation will be impossible...if we don't make preparations we may find ourselves silenced or absolutely helpless when either war or the pre-war fascizing process begins. (4 January)

We are therefore in either for war in the next two years, or for a prolonged war-preparation, or possibly only for sham war preparation designed to cover up other objects, but in any of these cases for a fascizing process leading to an authoritarian regime i.e. some kind of austro-fascism. (5 March)

The switch came suddenly. I can't pinpoint it exactly, but it is virtually certain that 'he saw the light' within days, if not hours, of the conclusion of the Hitler Stalin Pact.

In All of Orwell Clive James, another brilliant essayist, details the continuing political development of Orwell during the war itself, his admission, amongst other things, that he was wrong in saying that Hitler would only be defeated after a revolution in England. It went further. For, as James says, Orwell wrote less and less of 'bourgeois democracy', coming to suspect that the democratic part might very well depend on the bourgeois part.

The brilliance of Orwell, the reason I love his work so much, is that he represents a uniquely British intellect, a kind of native genius that, while it may have embraced abstract and alien theories, it was never enthralled to them. Orwell was a journalist and an empiricist before all else. For him facts were always going to undermine bogus preconceptions and second-hand truths, all that dusty theoretical baggage lifted from the attic of the mind.
Posted by Anastasia F-B at 16:33