The Song of Hate 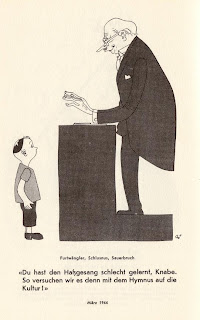 Ernst Lissauer, a German-Jewish poet, is remembered, if he is remembered at all, for one thing, and one thing only -Gott strafe England-the most memorable phrase from his Hassgesang gegen England-Hate song against England.

Lissauer, a friend of Stephan Zweig, was a committed nationalist and a devotee of the Prussian tradition. Zweig said of him "the more German a thing was the greater was his enthusiasm for it." His devotion to German history, poetry, art and music was, in his own words, a 'monomania'.

In the hysterical atmosphere brought on by the war his Hassgesang became an instant success. Rupprecht of Bavaria, commander of the Sixth Army, ordered that copies be distributed among his own troops. The Kaiser was pleased enough to confer upon the author the Order of the Royal Eagle. However, despite the general atmosphere of condemnation against England for 'causing the war', the Hassgesang was not without its critics. The Frankfurter Zeitung was bold enough to denounce the "impotent hatred that spits at us everywhere". With one or two exceptions it was not widely popular among Lissauer's fellow Jews, who had a tendency to identify with England's liberal tradition. The publicist Benjamin Segel said that the poem did not contain “as much as a spark of Jewish sentiment."

Sadly for him, Lissauer ended by pleasing no-one. In one of history's supreme ironies he was even criticised by the vigorous anti-Semitic movement of the day for expressing such 'fanatical hatred', which they considered 'unreasonable', 'utterly un-German', and 'characteristic of nothing so much as the Jewish race'! Difficult to believe, I know, but true nonetheless. Houston Stewart Chamberlain declared that the Teutonic German did not "wallow in Old Testament hate."

Lissauer himself came to regret writing the Hassgesang, refusing to allow it to be printed in school text books. After the war he said that his poem was born out of the mood of the times, and that he did not really mean it to be taken seriously. In 1926 he said that rather than writing a hymn of hate against England it would have been better if he written a hymn of love for Germany. In every sense an unfortunate man, he did his best to balance two traditions, one Jewish and the other German, at a time when history was forcing them apart. In 1936, now living in Vienna, he was to write "To the Germans I am a Jew masked as a German; to the Jew a German faithless to Israel." He was now also fully aware of the true implications of the Hassgesang in a world that was "sick from hatred of nation against nation."
Posted by Anastasia F-B at 16:34