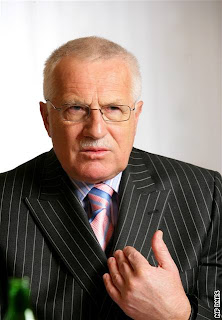 Casting my eye across the political class of Europe it occurs to me that they are a pretty pathetic lot for the most part. There is Super Sarkozy, the absurdly vain and silly president of France, prancing around in high heels and surrounding himself with people even smaller than himself…apart from his wife! There is President Rip van Rumpy-Pumpy, so boring he probably sends himself to sleep. There is Seedy Silvio, the laughable Lothario, guided not so much by his brain but an altogether baser part of his anatomy! And then there is Vaclav Klaus.

I really only became aware of Klaus over the resistance he put up, the principled and gallant resistance, to the forward progress of the Lisbon Treaty. The pressure he was under at that time was immense, with Sarko threatening all sorts of dire reprisals against the Czechs. He resisted as long as he could until there was no more point in resistance. I so admire him for this, for his principle and for his decency. I admire him not just because of his stand against Lisbon but because he is the one leader of any stature to take a stand also against the climate change orthodoxy.

To understand President Klaus better one has to look into his background. He began his career in the old communist Czechoslovakia, trained as an economist in the Marxist orthodoxy of the time. Even so, he was quick to perceive that this ideological deadweight was responsible for the economic failures of the east compared with the capitalist west. Latterly influenced by the economic liberalism of the Chicago and Austrian Schools, he accepted that free markets and free societies go hand and hand.

It was his experience of central planning, of the deadening effects of bureaucracy, which stood behind his opposition to Lisbon. Though it seems to have gone largely unnoticed in this country, the speech he gave on the twentieth anniversary of the fall of the Berlin wall was among the best to mark the occasion, a celebration, yes, but also a warning. He said that the first ten years after 1989 was an uphill movement towards freedom and democracy. But then things started to go wrong:

…the second post-communist decade has been…downhill. Now, we experience less freedom, more regulation, more manipulation of people in the name of all kinds of politically-correct ambitions, post-democracy instead of democracy, growing disbelief in markets… In the 1950s and the decades after, the leading idea behind integration was liberalisation. It focused on a lack of borders and free movement of people and ideas. This was a very positive concept for Europe, and I believe it should continue. However, integration has turned into unification.

It is this process of centralisation, standardisation and regimentation that is as much a danger now as it ever was in the past, no matter the shift in ideological priorities.

True to his unique perspective, Klaus has also taken a stand, calm and insightful, against the likes of the increasingly hysterical Al Bore-who seems to be frightened to debate with him-and his large tribe of warmists. It is, as Standpoint highlights, no coincidence that Klaus is the only head of state who actually knows something about climate science and a lot about the economics of cap-and-trade. Two years ago he published Blue Planet in Green Shackles in which he argued that the policies advocated by the warmists would be much more ruinous than any negative effects of higher temperatures. But the key argument for me focuses not on the science but the politics. This should be repeated time and time again: the greatest threat to freedom in our century is, as Klaus says, no longer socialism but the “ambitious, arrogant, unscrupulous ideology of environmentalism.” Alas, when the world wakes up to this simple truth it may be too late.
Posted by Anastasia F-B at 16:28