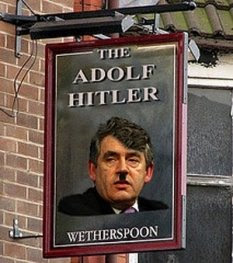 We are witnessing an interesting process of degeneration at the present, or a reverse metamorphosis: New Labour, the Blair Project, is dying by rapid degrees. In its place the Old Labour Adam is re-emerging, blinking in to the light, full of ancient class resentments, full of old war cries. Yes, the Blair Project is dead; the Brown Project arises.

What we have before us is the manifesto of the grudge trawled up from the past. Tories are to be attacked and pilloried as public school toffs, one element of a two-pronged strategy, the other being an attack on the rich and the successful, first outlined in last year’s pre-budget report (PBR), when a new top rate of income tax was conjured into existence. The attack on bankers and banker’s bonuses, a popular target just at the present, also falls within this general rubric.

The assumption with both is that Britain, the British people, are full of the same cringing sense of inferiority and resentment that is such a part Gloomy Gordon’s repressive Presbyerian personality. I rather suspect that his resentment of Tony Blair was as deeply rooted in personal jealousy as anything else. After all, Blair went to a public school and he did not. He is just, to use that frightful phrase, a ‘son of the manse.’ So the attack on Cameron and the Etonians proceeds from the assumption that they are weird and different and he is not!

The strategy is so narrowly conceived that all but a one-eyed and blinkered man could see. Yes, it will buy votes among those who hate toffs and bankers but these are the kind of people who would vote Labour anyway. Labour for them is no more than the political expression of resentment. Class for Brown, as The Economist rightly says, is a bit like immigration for the Tories: the people who are pleased to hear him talk about it were already listening anyway.

Meanwhile, the bankers, those dreaded bankers, have become another of Gloomy Gordon’s scapegoats. Let’s all focus on those bonuses while the country slips steadily into the worst debt crisis in its history. Darling Darling’s latest PBR had absolutely nothing to do with the country’s finances and everything to do with this wretched government’s desperate attempts to cling on to power. Even Charles Clarke has said that Brown was frightened of allowing the Chancellor to present the full picture because he is frightened of the voters’ reactions. Instead even more spending was promised while the Bank of England, the OECD and the IMF and credit-rating agencies have all warned that the continuing growth in borrowing is unsustainable. If-God help us all-Labour win the election we will all soon find out exactly how unsustainable it is, especially the voting fodder in the ‘public’ services.

Let us look towards spring. There is the Leader in his bunker, doing his best to ignore the distant echoes of enemy artillery while he plays with his models and pours over his maps, planning a future that will never come, a victory that will never come. There he is spilling venom, blaming everyone but himself for the disaster that has descended on the country. There he is a sad, wretched little man, permanently unfulfilled, permanently resentful, now on the down sweep of history. There he is, the son of the manse.
Posted by Anastasia F-B at 16:39