Long Reigning Over Us 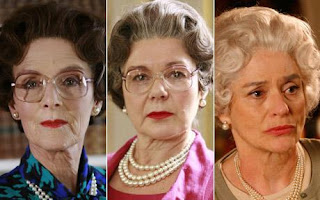 I really quite enjoyed Channel 4’s drama-documentary about the Queen, shown last week over five nights, with a different actress playing her on each of the nights at key moments in her reign. They were reasonably good in their individual ways, though I think none of them really came close to Helen Mirren in The Queen. For those who did not see the television production the events surrounding the death of Princess Diana were not depicted, largely, I suspect, because a comparison would inevitably have been drawn with the movie.

I thought the opening and closing episodes of the series framed the history of the post-war monarchy so well; the first dealing with Princess Margaret’s relationship with Peter Townsend, a divorcee, with whom she was very much in love, but decided not to marry because of the call of royal duty. This was a time in the early 1950s when the abdication of Edward VIII still cast a shadow over the royal family. In the final episode Prince Charles declares that his relationship with Camilla Parker-Bowles, another divorcee, was ‘non-negotiable’, and that he would marry for love. The ghost of Wallis Simpson, if you like, had finally been exorcised. The two cases, so similar is some ways, reflected a change in personal and national attitudes. It was their history, the history of the Windsors, the history of the institution, but at a deeper level it was also a history of us all, a history of the changes in Britain, as profound and far-ranging as any revolution, since the Queen first came to the throne all those years ago.

The second episode of the series, where the Queen is played by Samantha Bond, dealt with the turbulent early 1970s, when the country was under threat from trade union militancy and terrorism. Princess Anne has long been among my favourite royals because we share that same enthusiasm for horses. But seeing the dramatic recreation of the kidnapping attempt of 1974, seeing the way she behaved at the time, confirmed just what a remarkable, cool-headed and courageous person she is-an absolute brick!

The episode I enjoyed the most, though, was the one with the ‘two queens’, if I can put it like that, the first in Buckingham Palace and the other in Downing Street! In this episode the Queen was played by Susan Jameson and Margaret Thatcher by Lesley Manville. Manville was good, I thought, as the Iron Lady, depicting something of the more vulnerable side of her character. The clash between the two women, subtle but prickly, was well captured over the issue of the Commonwealth and sanctions against South Africa.

The Queen took an oath early in her life to serve the Commonwealth. Though she has taken all of her oaths seriously this is one to which she has had a particularly strong commitment. But as far as Margaret Thatcher was concerned the Commonwealth could go hang! Sorry, I’m being facetious but it was in the one episode that I found myself ‘out of sympathy’ with Her Majesty, though that’s not really quite the right expression. The Queen’s enthusiasm for the Commonwealth is admirable but as the years have passed since the coronation I suspect that those who share it have declined in ever increasing numbers. It seems to have so little relevance to our lives now, this residue of Empire. I further suspect that if today if a union of Commonwealth supporters in this country were called to, say, Scarborough, they could all be comfortably accommodated with hotel space left over.

Yes, it was good to get some insight, if partly fictitious, into the way ‘the firm’ operates, into the way in which the monarchy has played such an important part in the lives of each and every one of us; in keeping the country on course, in preserving an identity, a continuity, in the midst of transformation.