Father of his People 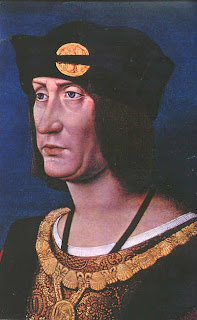 As an example of early modern kingship Louis XII of France bears quite a close relationship to Henry VII. Although he came late-and unexpectedly-to power, he acted with vigour, reforming the French legal system, reducing taxes and improving government, much like Henry in England. He also occupies the same ambiguous position in history, being both a late Medieval and a Renaissance monarch. His marriage to Anne of Brittany, conceived for political purposes, might also be said to parallel that of Henry to Elizabeth of York. Louis was also skilled in managing his nobility, including the powerful Bourbon faction, which greatly contributed to the stability of French government.

Although Louis' administration was not dominated by lawyers and financial specialists to the same degree as that of Henry, he was just as innovative. In the Ordinance of Blois of 1499 and the Ordinance of Lyon of 1510, he extended the powers of royal judges and made efforts to curb corruption in the law. Highly complex French customary law was to be codified and ratified by royal proclamation. Although he was less financially astute than the parsimonious Henry, he was reasonably careful, unlike many of his predecessors, with crown revenues. At the end of his reign the crown deficit was no greater than it had been when he succeeded Charles VIII in 1498, despite several expensive military campaigns in Italy. His fiscal reforms of 1504 and 1508 tightened and improved procedures for the collection of taxes.

The one big difference between the two monarchs was in military affairs. For Henry war was simply 'bad for business.' Louis, in contrast, through his obsession with the duchy of Milan, to which he had a claim in right of his grandfather, embarked on several campaigns in Italy. His greatest success came in his war with Venice, with the victory at the Battle of Agnadello in 1509. Things became much more difficult for him from 1510 onwards, especially after Julius II, the great warrior Pope, took control of the Vatican. Although his Italian ambitions unravelled, Louis managed to end his reign in 1515 as a well respected monarch, who had withstood a great European coalition of powers. He had duly earned the title of 'Father of the People', conferred upon him by the Estates in 1506
Posted by Anastasia F-B at 16:34