Who are the Barbarians? 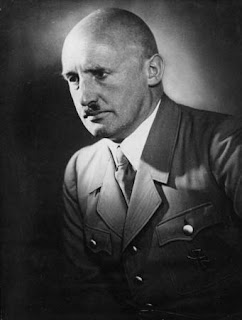 I have before me the summer issue of Standpoint, a journal of political comment. It's the leader I'm looking at, headed Obama and the barbarians. It's not the main topic that I'm thinking about; rather it's the developing argument about the nature of modern barbarism, which Daniel Thomas, the editor, says comes in many forms, including Diana Mosley interrupting one of her dinner parties calling for a moment's silence in memory of Julius Streicher. It's eccentric, certainly, but was such a gesture barbarous?

Streicher was a repellent man; there is no doubt in my mind at all about that. He was the sort of man who would not be invited to sit down with civilized and cultured people at any decent dinner party. Der Stürmer, the paper he edited, is possibly the most repugnant publication ever, with its relentless cadence of hatred. Even some senior Nazis were repelled by it. Göring refused to have it in his offices and Baldur von Schirach refused to allow its distribution among the Hitler Youth.

Yes, Der Stürmer was ugly and Streicher repellent, but did he deserve to hang for being the editor, because that was effectively the chief charge, the only charge, for which he stood trial at Nuremberg? By any reasonable standard Streicher's anti-Jewish obsessions betoken some kind of deep-rooted psychological problem. The way he presented his defence, the things he said and the way he died give further evidence of this. But he was hanged while Albert Speer, in every way more culpable, survived.

Should people, be hanged, then, for expressing repellent views? Who, then, would stand in that wind? Yes, of course, one has to consider the times, the revelations that came after the Nazi state died. Nevertheless, in retrospect, I just wonder who defines the nature of barbarism. Would it have included Andrey Vyshinsky, the chief Soviet prosecutor at Nuremberg, the man behind the Moscow show trials, in every way bloodier than Streicher?

It's never easy to measure moral dilemmas in absolute terms. Perhaps Mr Thomas might remember this when he next passes judgement on the forms of barbarism
Posted by Anastasia F-B at 16:04