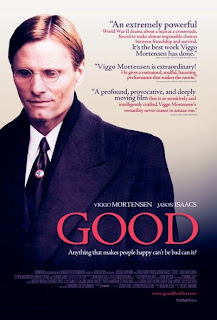 I saw Good earlier this year, a movie directed by Vicente Amorim and starring Vigo Mortensen as one John Halder, a professor of literature in a German university in the 1930s. It's based on the play of the same name by Cecil Philip Taylor.

Before proceeding let me just say that I have a particular interest in the process of moral corruption, the manner in which people are compromised by association with evil though not in themselves necessarily evil. It's not that long since I finished reading Jonathan Littell's The Kindly Ones, in which the author tries to determine by what process an ordinary man becomes part of an apparatus of murder. I have to say that I thought this book was grossly over-praised for what it offered, particularly in the way of literary skill, but the idea behind it was intriguing and sound. It rests, perhaps, on one key question: what would you, yes, you, have done if you had lived in Nazi Germany? Would you be the one in a hundred thousand who had the courage to say no or, would you have drifted along, like so many others, for the sake of your family, your friends, your colleagues, or simply for the sake of your career? It's not a question that I personally can answer with any true certainty.

So back to Good which tells the story of a 'good' German, an unassuming man, a family man, a teacher of literature and a lover of Proust, shocked by the barbarism of the new Reich. He refuses to join the Party despite the urging of his Nazi father-in-law. He has a Jewish friend, a psycho-analyst, with whom he served in the same regiment during the First World War. Taking nothing seriously, the good professor believes that the nightmare will pass, as he assures Maurice, his Jewish friend, played by Jason Isaacs.

Halder undergoes, I suppose, what was referred to at the time as 'internal emigration', namely he retreats into himself, into his personal world. During this period he happens to write a novel, a romance, which touches at the end on the subject of assisted suicide, the supreme act of love. That's it, he doesn't think any more on the subject until some years later he is summoned to the Reich Chancellery, there to meet none other than Philipp Bouhler, played by Mark Strong in one of the movie's better performances, who tells him that the Fuhrer himself has been impressed by the message offered by the novel he wrote all those years before.

So, Halder, essentially a man with little strength of character or moral resolution, at first frightened by the invitation and unsure of what was wanted of him, is flattered, showing no reluctance to prepare a paper on the subject of 'mercy death.' He even receives rank in the SS, shocking Maurice as much as it pleased his Nazi-sympathising mistress. From this point forward his career takes off and his novel is turned into a movie, with the final scene showing a loving husband holding his dying wife in his arms.

The compromises continue from this point forward. Halder preserves something of his old 'decency' in continuing attempts to help Maurice, though his efforts are never very forceful. Maurice finally disappears during the Kristallnacht pogrom of 1938. Years later, on a visit to what I take to be Auschwitz, Halder, now resplendent in his black SS uniform, comes across Maurice in a kind of tableaux from hell. He observes and he drifts with the same bewilderment that has pursued him throughout.

As a movie Good is not that good. It most definitely suffers in comparison with The Reader: it's anaemic where that latter was full-blooded. But the moral dilemmas explored are interesting, as Halder remains 'good', if perplexed, right to the end. The essential problem with Nazism, of the whole Nazi experience, was not evil in itself; for few people are truly evil. No, it was moral cowardice.