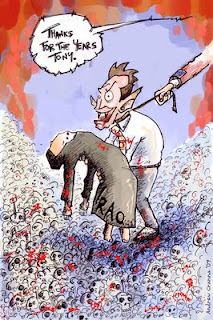 I’ve blogged in the past about the fashion, both fatuous and vain, for contemporary politicians to apologise for the tragedies and mistakes of the past; over things that happened well before they were born or over which they had no control (The Joker in a Gay Mood and No Point in Apologising for the Past). I’ve had further thoughts about this, inspired in part by Rod Liddle’s latest column in The Spectator, and in part the leaks from the Iraq Inquiry reported in The Sunday Telegraph.

Liddle’s reflections have been brought on by the latest round of apologies, that over the British children sent out to Australia last century, where they often suffered abuse and neglect. Brown has taken it upon himself to say sorry, just as he said sorry over the past persecutions suffered by homosexuals. It is, Liddle says, the quintessential example of the modern apology: a politician who is not remotely contrite apologising for something for which he had not the vaguest responsibility and for which, therefore, he cannot be blamed. A non-apology apology, then-an apology for something someone else did, and what’s more, did in the best of faith.

I suppose it might be of some comfort to someone somewhere that, given this trend, they can expect an apology for present injustices and wrongs, injustices and wrongs committed by the present government, in, say, fifty or a hundred years from now, delivered by politicians as yet unborn, though they will most likely not be around to enjoy the experience. I personally would like our dear Prime Minister to apologise for a more immediate enormity, one from the not too distant past: namely his Party’s close and potentially treasonable ties with the old Soviet Union. I don’t expect that any day soon, though; maybe in fifty or a hundred years. Never mind: what about an apology that would not cause the government too much distress, perhaps over Henry VIII’s dissolution of the monasteries or Edward I’s expulsion of the Jews?

Tony, Not the Euro President, Blair led the way here, apologising for the Irish Potato famine, for slavery, even for the treatment of the Maoris! But let’s look at the thing, the one thing, he really needs to apologise for-the Iraq War. Did you read the report in the Telegraph? Did you read how he lied to Parliament about the planned invasion; how our troops were sent often half-prepared; how there was absolutely no thought given to a post-war strategy? The full human cost of this dreadful tragedy has yet to be quantified, but hundreds of thousands of innocent people died for Blair’s vision, for Blair’s mendacity.

Casting my mind over the past hundred years I cannot think of a similar enormity by a British Prime Minister. Even Anthony Eden’s Suez adventure is nothing in comparison. Yet this man, who, so far as I am concerned, might very well be indicted at The Hague for war crimes, was being considered for the Presidency of Europe. I’m sure the Inquiry will produce a lot more evidence of the enormities that Blair, the peace maker, committed in the Middle East, evidence depicting a situation that positively demands some genuine contrition and a truly meaningful apology. Alas, it’s an apology that will never be made. Never mind; there is always the dissolution of the monasteries, the expulsion of the Jews and on and on.
Posted by Anastasia F-B at 16:42