The Well of the Heads 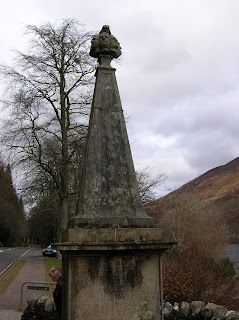 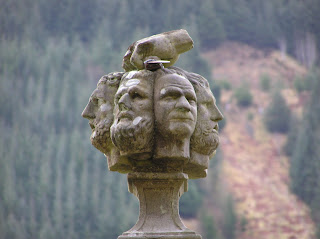 My family has a cottage in Easter Ross in northern Scotland. We went there almost every August when I was growing up. Quite often, when father went shooting, mother and I used to go on what we called explorations. Once, by the shores of Loch Oich, we discovered a strange monument, an obelisk surmounted by stone heads. And here is the story it commemorates, true and bizarre in every detail.

In September 1663 Alexander Macdonald, chief of the MacDonalds of Keppoch, and his brother, Ranald, were murdered in uncertain circumstances by some of their own kinsmen. They were unpopular within the clan and the matter might have passed but for the efforts of one John Macdonald, known in Gaelic as Iain Lom, a singular individual who also happened to be a bard of some considerable power.

He remained loyalty to the old chief, consigning his thoughts on the crime to his poem The Keppoch Murders. His determination to obtain justice made him enemies among his immediate kin, forcing him to seek refuge with other branches of Clan Donald, first with the MacDonalds of Glengarry, where he tried to persuade the chief to take action. When Glengarry refused Ian turned to the MacDonalds of Sleat. Finally, in 1665, he obtained permission from the Scottish Privy Council to proceed against the men whom he held responsible for the Keppoch murders in concert with the men of Sleat.

Alasdair Macdonald of Inverlair, the chief suspect, together with six other men, were traced to Lochaber where, after a fight, all were killed. Iain Lom then cut off their heads, intending to take them to Edinburgh. By the shores of Loch Oich, close to Invergarry Castle, he paused to wash the heads as a mark of reproach to the negligent chief of Glengarry. For ever after the spot was known in Gaelic as Tobar nan Ceann-the Well of the Heads. The stone monument was erected in 1812 by a later chief of Glengarry.
Posted by Anastasia F-B at 16:58