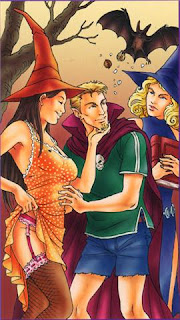 I’ve been sexually active since I was thirteen years old, in one way or another. For a long time I had real issues about my sexual identity. From the age of twelve until I was eighteen I went to an all-girls boarding school and some of my earliest romantic feelings were for other girls, unattainable figures of perfection mostly, prefects in the upper school who would never condescend to an oink like me! I was convinced for a long-time that I must be a lesbian, though this did not prevent me from having relationships with boys during the holidays. Now I simply define myself as bisexual, and am happy to enter into relationships with girls or guys. Perhaps omnivorous really is a better word!

My problem is I fall in love quickly, too quickly, perhaps, and then start to get bored after the first rush of passion. I’m doing quite well now I suppose, in that my present boyfriend has lasted for ten months, a record by my standards. I suppose I have a tendency to wear people out, or to draw all I can from them like a vampire, before moving on. It’s unsettling sometimes. Perhaps it’s the fault of my early experiences, with no real forms of emotional consistency; perhaps it’s something else. I can’t say for certain. I have to confess to having the most terrible ego! I just don’t ever see me settling down to some long term commitment like marriage. I think I would end up making myself miserable and turning the guy’s life into all hell in the process. I know I drive my mother to complete distraction. :-))
Posted by Anastasia F-B at 20:29