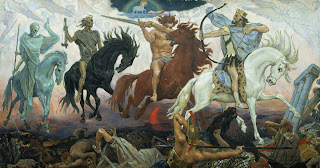 Nothing really ever happens in isolation but as part of a sequence. I must say that the continuing obsession with 2012 and the coming Armageddon continues to cause me lots of impish amusement, as if this eagerly anticipated event, and, yes, some do seem to anticipate it eagerly, is of seminal significance, a case sui generis. That’s rubbish of course, as anyone who has any knowledge of the currents and eddies of history will tell you. I’ve already written about Asahara but let me pilot you through just a few of the past apocalyptic visions.

The basis for most of the Christian and post-Christian visions comes, of course, from the Judaic tradition of the Messiah, a godly figure whose appearance would introduced a Millennium of peace and justice, a brave new world that has such people in it!

In Christianity Christ comes not as a god-like figure but as God himself, though the much longed for Second Coming was left vaguely open in early chiliastic thought, at least until the early Middle Ages, when Gregory of Tours set the date sometime between 799 and 806AD, a fatally precise figure, one would have thought! The time came…and the time went. Even so, a tradition of prophecy as an ‘exact science’ has been followed ever since, no matter how foolish the prophets appear after the (non-) event.

Such thinking, it might be said, was born of an age of faith, but it also slipped into the dawn of the age of reason. John Napier, a mathematician of some brilliance, the man who devised logarithms, predicted that the Last Judgement would either come in 1688 or 1700, depending if one took one’s point of departure from Revelations or the Book of Daniel.

The age of reason came and went and the age of gullibility began; and no period was more gullible than the nineteenth century, particular among the new forms of Protestant evangelism that started to appear. William Miller, an American Baptist Minister, predicted that Christ would return in 1843. When nothing happened he admitted, with some embarrassment, that his calculations had been wrong, setting a new date of 22 October 1844, as precise as one can get, saving the hours, minutes and seconds! Once again no Christ appeared, just what subsequently became known among his thousands of followers as the Great Disappointment, which lead to the later creation of the Seventh-day Adventists, a future offshoot of which was the infamous Branch Davidians.

In England the so-called Catholic Apostolic Church, less sure of their calculations, held that Christ would return sometime between 1838 and 1855, appointing twelve apostles to greet him. No provision, of course, was made to replace these worthies who died in the meantime. The last of them expired in 1901.

On it went, with doomsday messages being preached by heretical sects like the Mormons and the Jehovah’s Witnesses. Time and embarrassment is now set to kill the prediction of the Witnesses, made as long ago as 1920, that “millions now living will never die.” They did; they have.

One would have though that the failure of a single and precise prediction would be enough to kill such things off, but the human mind is both infinitely elastic and infinitely gullible. In studying a UFO cult, Leon Festinger, a sociologist, published a book in 1956 entitled When Prophecy Fails, coining the rather ugly phrase of ‘cognitive dissonance’, serving to explain what happens when expectations and reality are out of step. It’s almost as if when a proposition in logic, that most precise branch of philosophy, fails its originator continues to defend it with what might be called the ‘yes, but’ mode of argument!

Most of these movements are made up of harmless eccentrics, ever fed on disappointment. But in recent times more alarming doomsday cults have appeared, those who actively seek to anticipate Armageddon, not stopping short of mass murder in the process; those in the mould of Asahara. Death, for these people, is the one sure way of avoiding the disappointment of frustrated prophecy. Beware always the false prophets; beware always of those who would steal your future.
Posted by Anastasia F-B at 16:02