Die Wilde Jagd, or The Wild Hunt, is a folk-myth common across Northern Europe in pre-Christian times, in which a group of ghostly or divine riders race across the sky, used, among other things, as an explanation for thunderstorms, or as a warning of some impending catastrophe. It is sometimes referred to as Wotan’s Hunt, after the chief Germanic deity. It has been depicted in art, both ancient and modern. The painting I would like to focus on is that of Franz von Stuck, a German symbolist. Here it is below. It was painted in 1899. Does the figure of Wotan remind you of anyone? :-)) 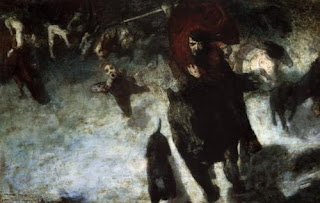