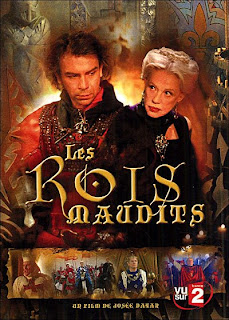 Les Rois Mudits-The Accursed Kings-is a series of historical novels by Maurice Druon, set against the final stages of the Capetian monarchy in France.

It begins with the reign of Philip IV, known to history as ‘The Fair, one of the most ruthless of the French Medieval monarchs, directly responsible for the destruction of the Templar order. After seizing the wealth of the order Philip has Jacques de Molay, the Grand Master, burned as a heretic. As the flames rise around him, de Molay issues a curse of the royal house. And it was a curse of some potency. Philip died in 1314. In 1328, a mere fourteen years later, the direct Capetian line was extinct, going through no less than another four monarchs, from Louis X, the infant John I, Philip V and Charles IV. In its place came the House of Valois, a disputed succession that was to lead directly to the Hundred Year’s War, one of the great tragedies of French history.

England had, it might be argued, its own accursed kings in the Lancastrian dynasty. Henry Bolingbroke usurped the throne from his cousin Richard II in 1399, and subsequently had him murdered.

A successful and assertive nobleman, Henry was a disappointing king, haunted by rebellion and conspiracy and cut down by disease. Henry V, his son, the great warrior-king, managed to deflect the memory of his father’s usurpation in a new round of war with France, but he was cut down by dysentery after a reign of only nine years, to be succeeded by the infant Henry VI. It was now that the full effects of ‘Richard’s curse’ came to play. Henry grew up to be a weak king, the weakest in English history. Unable to control people or events he descended into madness as England was overtaken by the dynastic struggle known as the Wars of the Roses.
Posted by Anastasia F-B at 18:19