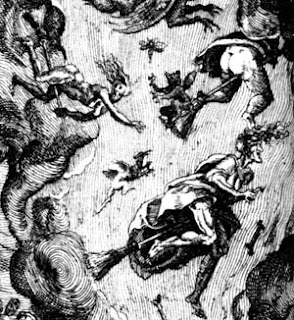 Flying witches have long been part of popular consciousness. In The Witch-hunt in Early Modern Europe Brian Levack points out two roots to this belief. The first, traceable to classical times, was that women could transform themselves at night into screech owls or strigae, who would devour infants. These night witches are to be found across time and across cultures, from Germany in pre-Roman times to modern Africa.

The second belief was that women went out on a night hunt with the Diana, goddess of the chase the moon and the night, often identified with Hecate, goddess of magic and the underworld. In Medieval Germany Diana often takes on the additional guise as Holda or Percheta, who could be both nurturing and terrifying. It was Holda who was held to lead a ‘furious horde’ of those who died prematurely through the night sky.

Belief in these night witches was so widespread that it even made its way into the Canon Episcopi, a set of instructions written in the tenth century by Regino of Prum that eventually became part of canon law. The Canon specifically singles out;

…some wicked women, perverted by the devil, seduced by illusions and phantasms of demons…believe and profess themselves in the hours of night to ride upon certain beasts with Diana, the goddess of the pagans, and an innumerable multitude of women, and in the silence of the dead of night to traverse great spaces of earth an to obey her commands as their mistress and to be summoned on her service on certain nights.

And so it went on. In the Second World War the Russian female pilots, who flew over the German defences in the dark, were so effective in unsettling the enemy that they were known as, yes, you guessed it, Night Witches! 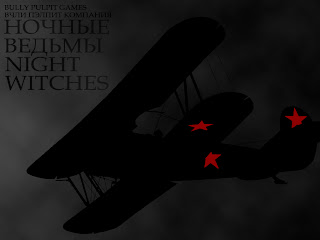