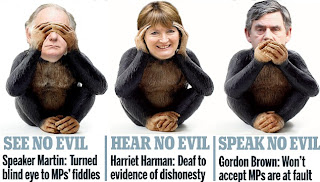 This affair gets more ridiculous by the day. Among the latest revelations I note that a Tory MP claimed for a ‘Duck House’ that he could float in his pond. Yes, a Duck House! As far as I am concerned Westminster, our present Parliament, is an Augean Stable of corruption, turpitude and filth. Oh, where are you Hercules? These people, the Members of Parliament, are supposed to be the best and brightest. I find it difficult to conceive of the worst! I can just imagine how this is playing across the rest of the world, you know, that place firth of these shores that ‘did corruption’ when we did not! At least the appalling Michael Martin, the Speaker of the House, is going, a man who was never, ever fit for such high office, a man that Charles Moore described, with his usual cutting wit, as being ‘thick as mince and tatties.’ Martin is just a particularly acute symptom, not the disease; that goes deeper; yes, it does. Enough, enough, enough!
Posted by Anastasia F-B at 17:53