Summer is a coming in-Loving The Wicker Man 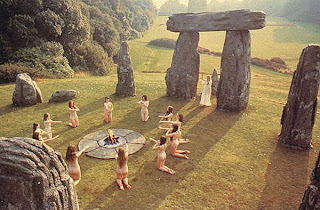 I have said it before, but it is worth repeating: The Wicker Man, the original, not the remake, is the best pagan-themed movie ever made. It's full of drama, sexuality, ritual and song. It ends with the glorious sacrifice of a male virgin in a giant wicker effigy-recalling the fate of the Roman captives after the Battle of the Teutoburger Wald-undisturbed by the sudden appearance of the self-righteous forces of good! Oh, my; to have been on that cliff-head singing Summer is a Coming in, Loudly Sing Cuckoo with all of the others. :-))

Oh, I how hate prigs, puritans and prudes, the Sergeant Howies of this world! Celebrate sex; love it; love life; to hell with all guilt and dissimulation. :-))

The ending, you see, as far as I am concerned is the best part by far. Not all pagan sacrifices were voluntary; oh by no means. I wonder if you have seen the full version, with all of the parts restored before the original commercial release? I have. It was shown on British television a couple of years ago. There are some gorgeous scenes. My favourite is Gently Johnny, when Lord Summerisle offers Ash Buchanan, a male virgin, to Willow. Afterwards, in reverie, he says to himself;

I think I could turn
and live with animals.

They are so placid
and self-contained.

They do not lie awake in the dark
and weep for their sins.

They do not make me sick
discussing their duty to God.

Not one of them kneels to another

or to his own kind that lived thousands of years ago.

Not one of them is... respectable
- or unhappy
all over the earth.

This is cut to a scene with Howie praying by his bedside, while the sounds of Willow’s sexual encounter comes through the walls. Oh, hot love, hot love indeed. :))
Posted by Anastasia F-B at 07:20