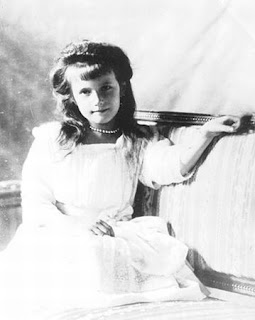 I’ve long had a fascination with Anastasia Nikolaevna Romanov for obvious reasons. It began when mother and father took me when I was about eleven years old to see Anastasia, the Disney movie, saying it was about me!

The real Anastasia was born on the 18 June 1901 in the Gregorian Calendar, the youngest of the four daughters of Tsar Nicholas II and his wife, the Tsaritsa Alexandra. She had three older sisters: Olga, Tatiana and Maria. In time the four Grand Duchesses were to refer to themselves collectively as OTMA from the initial letters of their first names. Anastasia was to remain the youngest child until the birth of her brother, Alexi, in August 1904.

She was known by various names within the family, including Nastaya or Nastas but my favourite has to be Shvibzak, her nickname, the Russian word for ‘Imp’. Anastasia grew up to be a true Imp: lively, intelligent and vivacious, with a caustic wit, which often got her into trouble. Gleb Botkin, the son of the Romanov court physician, later wrote of her,

She undoubtedly held the record for punishable deeds in her family, for in naughtiness she was a true genius.

Less generously her distant cousin, Princess Georgievna, said that she was nasty to the point of being evil. But for all that she was, like her sisters, devoted to her brother, who suffered from hemophilia.

When her father was forced to abdicate in March 1917 Anastasia and the rest of the family went into captivity, less and less comfortable over time. While at Tobolsk she wrote an essay on Evelyn Hope, the poem by Robert Browning, which included the following melancholy passage in uncertain English;

When she died she was only sixteen years old. There was a man who loved her without having seen her but knew her very well. And she heard of him also. He never could tell her that he loved her, and now she was dead. But still he thought that when he and she will live their next life whenever it will be…