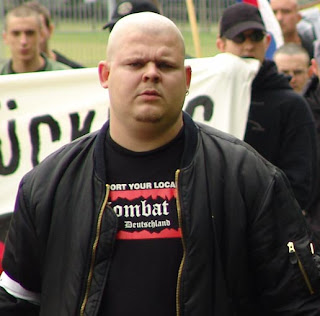 I come across people on some of the social networks I belong to who express some Nazi sympathies, not people, I have to say, with whom I have any direct interaction, if I can avoid it. Some of them say that they want the right to declare their own pride of race, ‘white pride’, in the way that others express, say, black or brown pride. This is usually followed with a catalogue of complaints about this race or that ethnicity. The truth is, of course, that one does not need symbols of ‘white pride, certainly not Nazi symbols, if one has sufficient confidence in oneself and one’s inheritance. Such an identity is an expression, rather, of deep forms of fear and self-loathing, a fear of confronting oneself, a fear of confronting an essential truth: there are people who would always be at the bottom of the heap no matter how the human race was structured. I would go so far as to say that hatred of others, hatred of other races, is a form of self-defence, a way of misting the mirror. In the end if the all of the out-groups disappeared, if humanity were reduced to a homogenous whole, the mirror would demist. Then these people would see themselves for what they truly are. That is the real horror.
Posted by Anastasia F-B at 19:28