Revenants: the Story of the Medieval Zombie

It seems strange to say so but right up to the Enlightenment most Europeans, educated and uneducated alike, believed that the dead could rise from the grave, almost in a Zombie-like form. They were generally known as ‘revenants’ or revised cadavers. In 1655 Henry More, a Cambridge-based philosopher, wrote that he could not so much imagine how anyone could doubt their existence, given the large number of convincing reports.

In the late Middle-Ages revenants were particularly associated with witchcraft. Martin del Rio, a Renaissance demonologist, said that Satan revived the dead to give comfort to his followers.

The reasons for this widespread credulousness are really not all that hard to determine. Christianity, after all, was based on the dogma of physical resurrection, the resurrection of the actual body, and not just the spirit. It was also believed that the boundaries between the world of the living and the world of the dead could be crossed, especially if one had unfinished business in life, or to warn sinners of what awaited them if they did not repent.

In an early version of Dickens’s ghost of Jacob Marley in A Christmas Carol, who returns to warn Scrooge of his fate, there is an account from twelfth century France of dead student who appeared at the bed of his friend, explaining the pains he could expect if he continued to lead a life of debauchery. He is said to have flicked three drops of sulphourous pus into his friend’s face, “…so that they pierced the skin and flesh like cauterising fire and made a hole the size of a walnut.”

Although such things vanished, along with Purgatory, after the Reformation in the Protestant part of Europe, revenants continued to exist, but in the form of demons. The dead, according to this belief, could be occupied and manipulated, a little like puppets. This fake resurrection was also held to be inspired by the Devil’s desire to ape the miracles of God. In 1751 August Calmet, a Benedictine Abbot, wrote of the false resurrection of a young boy;

…the demon that had animated him quitted him with a great noise; the youth fell backwards, and his body-which was fetid and stank unsupportably-was dragged with a hook…and buried in a field without any ceremony. 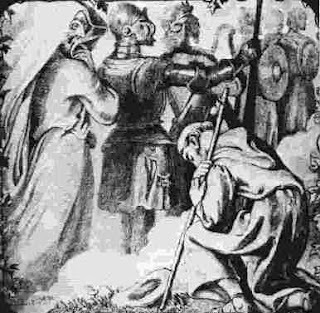