My Favourite Queen in History 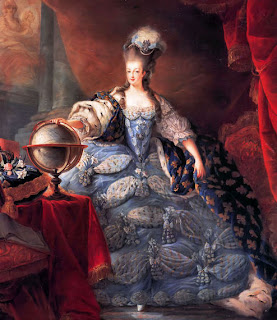 Is Marie Antoinette, has to be the lovely and tragic Marie. I’ve visited the Conciergerie in Paris, the former royal palace used as a prison during the Revolution, seeing the cell where she was allegedly kept prior to her execution. I think of her with much sadness recalling the passage in Burke’s "Reflections on the Revolution in France";

It is now sixteen or seventeen years since I saw the Queen of France, then the Dauphiness, at Versailles; and surely never lighted on this orb, which she hardly seemed to touch, a more delightful vision. I saw her just above the horizon, decorating and cheering the elevated sphere she just began to move in, — glittering like the morning star full of life and splendour and joy... Little did I dream that I should have lived to see such disasters fallen upon her in a nation of gallant men, — in a nation of men of honour and of cavaliers. I thought ten thousand swords must have leaped from their scabbards to avenge even a look that threatened her with insult. But the age of chivalry is gone; that of sophisters, economists, and calculators has succeeded.

That's one of the most memorable passages from an important and memorable book. It was published in 1790. Burke is here referring to the indignities that the Queen had suffered at the hands of the mob, particularly during March of the Women in October 1789. Her execution came in October 1793. I think if Burke was writing about that particular outrage his pen would have been a lot more acerbic: for if the age of chivalry was dead, the age of barbarism had been born
Posted by Anastasia F-B at 16:42