Courage in the Face of Death: Examples from Literature 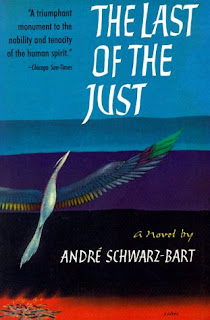 Lev Tolstoy's novella The Death of Ivan Ilyich leaps to mind. Also Ernest Hemingway's The Snows of Kilimanjaro. This theme might also encompass those who face execution, or are already on their way to the gallows, like Rubashov in Darkness at Noon, or Sydney Carton in A Tale of Two Cities. But the saddest account of a man facing death heroically and with great resolution is depicted in the The Last of the Just, a novel by Andre Schwartz-Bart, which deserves to be much better known in the Anglo-Saxon world. The last few pages left me completely numb: no easy thing, I assure you.
Posted by Anastasia F-B at 17:11