Inside the Medieval mind; sex, misogyny and passion 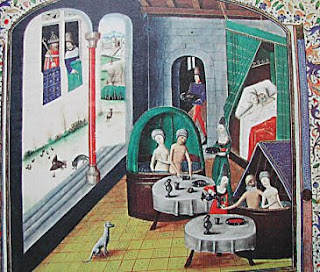 I was going over my old notes and came across some from last year, drawn from an article in one of my history periodicals. There’s some really interesting stuff on sex, guilt and sublimation, the sort of thing that Freud would have loved!

Sex, of course is a fairly constant part of the human experience, and people at the time could be just as direct and earthy in the way in which the experience was described as they are today. One only has to read Chaucer and Boccaccio to appreciate that. And who shall plough my little field? :))

Even so Medieval pleasures were tempered by the heavy burden of guilt, placed on the simple act of pleasure by the church. In the eleventh century priests were recommended to ask their parishioners if they had ever committed “….fornication with your step-mother, your sister-in-law, your son’s fiancée, your mother? Have you ever made a device in the shape of a penis and tied it…” And on and on and on.

This combined, of course, with a deep-seated misogyny, with Eve perceived as the author of original sin. In an early church story a heavy doom is placed upon women; “The curse of God pronounced on your sex weighs still upon the world. You are guilty-you must bear its hardships. You are the Devil’s gateway.”

It’s not just that Eve is guilty; all women are guilty. The same process of transference and perpetuation is to be found elsewhere, most specifically in the perception of the Jews as ‘Christ Killers.’ Anti-Semitism thus makes its way through this conduit into the modern age.