Great is Diana of the Ephesians! 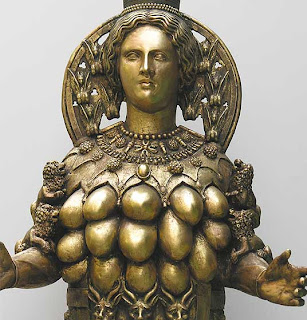 I was in Ephesus in Turkey last summer, in the ruins of the old Greco-Roman city, once the centre of the cult of the many-breasted goddess Artemis or Diana. The making of votive statues of the goddess by the silversmiths was an important part of the local economy.

Then St Paul arrived. Because of his preaching the trade in these religious artefacts dropped off sharply. One of the silversmiths, a man called Demetrius, gathered his fellow craftsmen. The initial complaint was over the decline in business but they found a higher cause, blaming Paul’s preaching for a loss of respect for the goddess herself. Rumours spread through the city, until a great crowd gathered in the central amphitheatre. The story is detailed in the Book of Acts, chapter 19, verses 24 to 41:

24: For a certain man named Demetrius, a silversmith, which made silver shrines for Diana, brought no small gain unto the craftsmen;
25: Whom he called together with the workmen of like occupation, and said, Sirs, ye know that by this craft we have our wealth.
26: Moreover ye see and hear, that not alone at Ephesus, but almost throughout all Asia, this Paul hath persuaded and turned away much people, saying that they be no gods, which are made with hands:
27: So that not only this our craft is in danger to be set at nought; but also that the temple of the great goddess Diana should be despised, and her magnificence should be destroyed, whom all Asia and the world worshippeth.
28: And when they heard these sayings, they were full of wrath, and cried out, saying, Great is Diana of the Ephesians.
29: And the whole city was filled with confusion: and having caught Gaius and Aristarchus, men of Macedonia, Paul's companions in travel, they rushed with one accord into the theatre.
30: And when Paul would have entered in unto the people, the disciples suffered him not.
31: And certain of the chief of Asia, which were his friends, sent unto him, desiring him that he would not adventure himself into the theatre.
32: Some therefore cried one thing, and some another: for the assembly was confused; and the more part knew not wherefore they were come together.
33: And they drew Alexander out of the multitude, the Jews putting him forward. And Alexander beckoned with the hand, and would have made his defence unto the people.
34: But when they knew that he was a Jew, all with one voice about the space of two hours cried out, Great is Diana of the Ephesians.
35: And when the townclerk had appeased the people, he said, Ye men of Ephesus, what man is there that knoweth not how that the city of the Ephesians is a worshipper of the great goddess Diana, and of the image which fell down from Jupiter?
36: Seeing then that these things cannot be spoken against, ye ought to be quiet, and to do nothing rashly.
37: For ye have brought hither these men, which are neither robbers of churches, nor yet blasphemers of your goddess.
38: Wherefore if Demetrius, and the craftsmen which are with him, have a matter against any man, the law is open, and there are deputies: let them implead one another.
39: But if ye inquire any thing concerning other matters, it shall be determined in a lawful assembly.
40: For we are in danger to be called in question for this day's uproar, there being no cause whereby we may give an account of this concourse.
41: And when he had thus spoken, he dismissed the assembly.

For an hour those people shouted out “Great is Diana of the Ephesians.” Well, I stood in the ruins of that amphitheatre, some 2000 years later, and shouted those same words at the top of my voice, something I had longed to do, to the complete astonishment of the hordes of tourists and our Turkish guide. Great she is indeed. :-)) 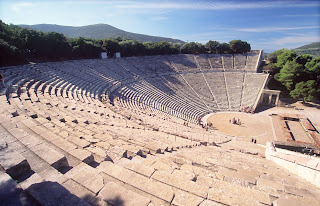