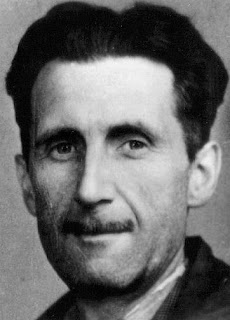 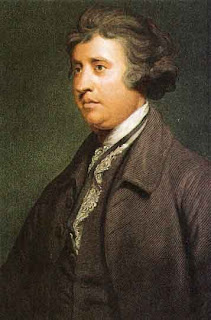 This is the bicentenary of the death of Thomas Paine, a political writer I have no particular respect for, despite the modish enthusiasm, I thought I would add a piece on the two I admire most: Edmund Burke and George Orwell.

Both Nineteen Eighty-Four and Reflections on the Revolution in France might be read as prophecies and warnings. Orwell's chief concern is with the globalisation of totalitarianism. Edmund Burke, writing in 1790, warned that the upheavals in France would only lead to further political destruction, terror and dictatorship.

Both men also expressed views that were not wholly welcome in their own political and intellectual milieus; in the case of Burke, the radical Whigs of Charles James Fox; and in the case of Orwell, the circle most associated with the left-wing demimonde. Their critiques were thus all the more trenchant because they were made from within the citadel, so to speak, not from the perspective of the establishment.

Orwell and Burks also shared a distrust of their fellow intellectuals. Orwell expressed his contempt of a certain kind of 'Bloomsbury highbrow' in The Lion and the Unicorn, his wartime essay on socialism and patriotism, just as Burke disliked Jean-Jacques Rousseau and the 'literary cabal', as he put it, of the French philosophes. On the fate of Marie Antoinette he wrote "But the age of chivalry is gone. That of sophisters, economists and calculators, has succeeded."

Both Burke and Orwell, two of the greatest political writers in the English language, were, in essence, defending human values threatened with destruction by waves of violence and intolerance. Both stand against the notion that cruel means justify abstract ends. I'm reminded, in particular, of Burke's warning in Letters to a Noble Lord to those aristocrats of his day who embraced radical chic-"...these philosophers consider men in their experiments no more than they do mice in an air pump."

But it is in his riposte to Rousseau, the grandfather of Fascism and Communism, that he is at his greatest: "Society is indeed a contract...but becomes a partnership...between those who are living, those who are dead and those who are to be born." You will find an echo of this in Orwell’s defence of patriotism as "…the bridge between the future and the past."
Posted by Anastasia F-B at 11:02