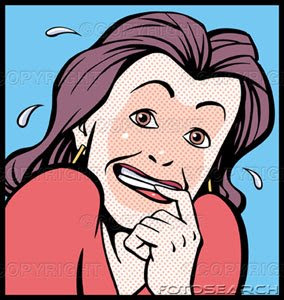 I was on a topless beach on the Côte d'Azur a couple of summers ago. That’s fine; I’m not the least bit self-conscious about exposing my breasts. But when I was swimming I lost the bottom part of my bikini, which was carried off by the current. I tried to attract the attention of my boyfriend but he was too far away, so I had no choice to come out of the water and rush up the beach completely naked, with cat-calls and whistles from all sides. :))

There was another moment in my life of acute embarrassment, though not on this occasion for me. When I was fifteen I was having sex with a guy in the bedroom of my family home. Mother was out and not expected to return, but she did. I did not hear her; she heard me, barging straight into my bedroom. She bawled at the guy to get out, refusing to leave until he did. While she glowered he got dressed, turning the deepest shade of red I’ve ever seen on another person. He also shrank to infinitesimal proportions, if you take my meaning. I had to stuff my duvet in my mouth to stop myself from laughing out loud!
Posted by Anastasia F-B at 18:15