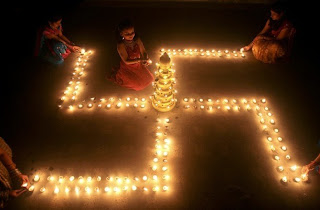 I touched on the subject of symbols, and the significance of symbols, in a recent discussion. What I would like to do here is to attempt to rescue the svástika-the swastika-the Hindu symbol of light, used to represent both Brahma, the creator god, and Surya, the god of the sun, from the gross corruption inflicted upon it by the Nazis and their acolytes.

I’m fully aware that the symbol is used in Buddhism and other eastern religions, but it was specifically in relation to the Hindu festival of Diwali-the festival of light-that I first became aware of it. Amongst other things, father has a collected edition of the works of Rudyard Kipling in his library, published before the First World War, liberally decorated with swastikas! In my religious studies class at prep school we coloured in swastikas and other Diwali symbols. It was only later that I discovered its modern political associations.

So, it was expropriated and debased, so much so that just about everyone throughout the western world will inevitably interpret it in a certain way. It’s banned in both Germany and Austria, and I cannot envisage any circumstances in which this will be lifted. But a German attempt to extend the ban throughout the European Union was opposed by the British Government and by Hindu groups across Europe, and rightly so.