Two Cheers for the Telegraph, or the Ducks say Fuck! 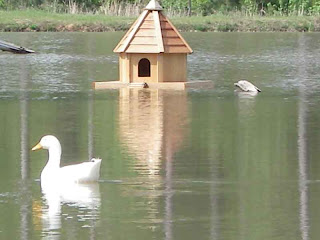 I think The Telegraph has done a splendid job in exposing the sheer carnality of our beloved Members of Parliament despite what the absurd and muddle-headed Archbishop of Canterbury says. I read today in The Sunday Telegraph that Derek Conway, one of the most venal of the lot, claimed for office expenses on his family home in Northumberland, some three hundred miles away from his constituency! And, oh, yes, Sir Peter Viggers, who claimed £1,600 for a floating house for his duck pond, says that the ducks have shunned the blasted thing, which is now in storage. In other words, the ducks said fuck! He should hear what people on the street are saying; so should they all.
Posted by Anastasia F-B at 19:34