In Praise of Julian 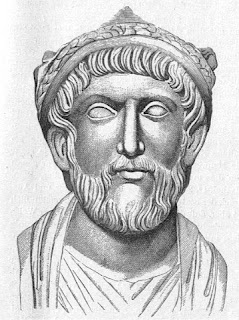 Julian, the so-called Apostate, was the last pagan ruler of the Roman Empire. There is a tragic quality to his brief reign, which seems to give the impression that his attempt to return to the old religion was foredoomed. This is far from being the case. All Julian really needed was time; time to turn matters around, time to establish a new dynasty supported by a new pattern of though. Time, sad to say, was the one thing he was denied.

But he understood the character of his enemy, indeed he did. His Edict of Toleration not only re-established the Pagan Cults but it allowed for the return of all of the dissident bishops who had been sent into exile by Constantius II, his predecessor. And if there was any religion more fissiparous and open to schism it was Christianity. Julian, moreover, did not make the mistake of returning to the wholesale persecutions of the past, which had given the Christians martyrs and momentum. Rather he removed all of the Church’s financial and political privileges.

Just imagine the possible fate of the Church, deprived of money and influence, without the backing of state power to settle the usual intense, and often murderous, theological disputes, divided and dividing, then it is possible to imagine a different future. And if you think such a scenario improbable you might care to investigate the decline of Christianity in Muslim Andalusia.
Posted by Anastasia F-B at 22:49