Loving the Impossible: the Case of Hanna Schmitz 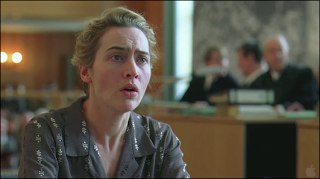 My boyfriend and I went to see The Reader earlier this year The movie is based, of course, on the novel of the same name by Bernhard Schlink, which I read some years ago when I was still at school. It’s chiefly about guilt; guilt about the Holocaust and guilt about the past; about personal guilt and about national guilt. It’s an impressive book, a tour de force, which made me think deep into the issues raised, but in an entirely cerebral way. I felt a certain guilty sympathy for the character of Hanna Schmitz, but nothing more. Then I saw the movie.

Hanna Schmitz is played by Kate Winslet, a part for which she was recently awarded a Golden Globe and Academy Award, deservedly so. She brings out the human tragedy of Hanna, a woman whose struggle to hide a personal shame determines each and every choice she has made in life.

The story begins in Germany some ten years after the end of the war. Hanna, a tram conductor, meets Michael Berg, the narrator of the story, and more than twenty years her junior. Despite the age difference they begin an affair, strongly sexual in nature, but lacking in real emotional engagement. Hanna continually holds Michael at a distance, and is sometimes quite callous in her attitude towards him. But she loves to be read to, all sorts of things, from Homer to Chekov. She never reads herself, not even the menu in a restaurant. The relationship continues over the course of a summer, the reading becoming as important, if not more important, than the sex. Then Hanna disappears, leaving nothing behind.

Years later, Michael, now a law student, attends the trail of some former SS guards in the company of his professor and others in his seminar group. It’s just another exercise for him, but there, among the female defendants is Hanna. As the trail unfolds she is the only one to express just exactly what she had done, in a straightforward and altogether human fashion. She is guilty, yes, but no more than her fellow accused, who dissimulate and evade.

When the court tries to establish who is most responsible for the principle crime, allowing hundreds of Jewish women to burn to death in a church, a document is produced, a report written after the event. The other accused collectively say that Hanna was the author. She is asked to provide a specimen of her hand writing. At once she admits that she wrote the document.

This is the critical point, the point when Michael, watching from the galleries, understands the full truth; Hanna is illiterate. Everything has followed from this, even her decision to evade a promotion at Siemens and join the SS. She is the victim of her own shame. Michael, carrying his own guilt, remains silent, and Hanna goes to prison for life.

Through all these stages, and all these changes, Winslet brings out Hannah’s inner struggles, shows her as a vulnerable and tragic figure, finally living through years in prison, consoled only by tapes sent by Michael; tapes of him reading Homer and Chekov. She ages; she learns to read; she asks Michael to write to her. Nothing ever comes; only the tapes. On the verge of release, after a visit in prison from Michael, their first meeting since she left his hometown all those years before, she hangs herself.

Winslet made me understand Hannah, she made me ever more sympathetic to Hannah and, at the end, she made me love Hannah.

Yes, it is possible to love the impossible.
Posted by Anastasia F-B at 13:41