Hitler and the Occult 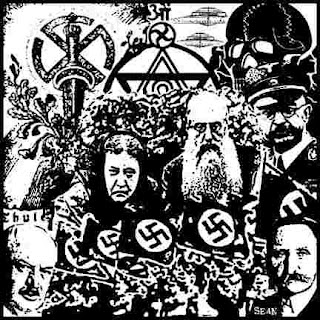 It maddens me when I see references, in both fiction and fact, to Adolf Hitler's supposed interest in occult forces. He did not have an astrologer, as some have alleged.. In fact he was altogether contemptuous of the practice, and astrologers were among one of the many groups persecuted during the Third Reich.

There were, however, some among the leadership prepared to take the practice seriously, either for political ends or out of simple superstition. Heinrich Himmler and Rudolf Hess were most notable amongst the latter. The man who came closest to being the 'court' astrologer was Karl Ernst Krafft, who was arrested in May 1941 following Hess's flight to Scotland, when Hitler, in his fury, ordered a fresh purge of occultists and astrologers of all kinds. Goebbels joked at this time that it was odd that not one amongst the group was able to predict what was about to happen to them!
Posted by Anastasia F-B at 18:05