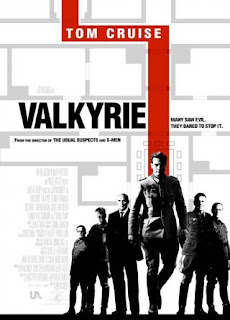 I went to see Valkyrie earlier this year. It’s good. Tom Cruise is passable as Claus von Stauffenberg, whatever reservations some people may have had about him taking on the part. It’s good also that some of the people in the German Resistance attain a wider recognition.

But I rather suspect that a new myth is about to emerge, that a government of ‘decent men’ could conceivably have brought the war to an end in 1944 thereby saving many lives. Would the government of 'decent men', one wonders, have included Artur Nebe, executed for his part in the July Plot, who in 1941 had commanded Einsatzgruppe B during the invasion of the Soviet Union?

It was once written that the SS were the 'Alibi of a Nation'. Well, by that measure, the German Resistance has become the 'Conscience of a Nation', proof that there were good Germans who were prepared to act in desperate circumstances.

Now, I should preface what follows by a simple statement that there were people in the resistance who are indeed worthy of admiration, people who opposed Hitler and Nazism from the very outset; people like Sophie Scholl. But there were still others who became 'resisters of occasion', people, in other words, who wanted the Reich, even if they-by 1944, anyway-did not want Hitler.

What I mean by this is that the conservative elites, especially those in the army and the diplomatic service, wanted to preserve the pre-war borders, Hitler's 'peaceful' conquests, before the country was overrun. It's as well to remember that the action of 1944 was to be based on a military coup, dominated, for the most part, by the resisters of occasion. The chief aim was to kill Hitler: the second aim was to stop Stalin.

So, are we to assume then that the Allies would have left a strong Germany under the control of a Prussian elite, dominating of a good bit of central Europe after years of bloodshed? It does not seem very likely. Just imagine, moreover, how the Soviets would have reacted to a coup, controlled by a military clique, and supported by the western Allies. It would look like a deliberate attempt to deny them the victory and keep them out of central Europe; it would look, in other words, like a new version of the 'Hess Plan' of 1941.

The suggestion that Stalin, whose army was approaching the Vistula, having fought through devastated Russian territory, would somehow have halted his advance because of the 'decent men' is, to be quite frank, a ludicrous conjecture. I cannot conceive of any circumstances in which the Red Army would have halted, not even if the western powers threatened war. And I am sure some people will be aware that an alliance between Britain, the United States and Germany against Russia was one of the fantasies that kept Hitler going in his last days, and why he insisted on the need to maintain a bridgehead in Courland.

Let's look at the issue from a slightly different dimension; let's assume that Hitler was killed, and the opposition took control, and Germany avoided total defeat and occupation, what then would have happened? Why, another myth would have been conveniently nurtured, another 'stab in the back' legend to comfort coming generations of right-wing extremists. Even at the height of the war there is plenty of evidence that Hitler remained popular with ordinary Germans. His sudden removal is likely to have created a sense of loss and betrayal, in much the same fashion as the flight of the Kaiser in 1918. Germany had to be defeated and seen to be defeated. It's as simple, and as brutal, as that.
Posted by Anastasia F-B at 17:31