London, the old London, the London of the Romans, the Saxons, the Normans and the Tudors was largely destroyed in the Great Fire of 1666, with the exception of some Medieval landmarks, most notably Westminster Abbey and the Tower. It was Charles II, draped in the toga of Nero, who began the reconstruction of the city, and Christopher Wren who gave it shape. Saint Paul’s Cathedral is, of course, Wren’s greatest achievement. But there are other London churches worth noting, including some also by Wren. So, using an old nursery rhyme as my introduction, let me walk you around a few. The nursery rhyme I have in mind is “Oranges and Lemons.”;

Oranges and lemons,
Say the bells of St. Clement's

You owe me five farthings,
Say the bells of St. Martin's

When will you pay me?
Say the bells of Old Bailey.

When I grow rich,
Say the bells of Shoreditch.

When will that be?
Say the bells of Stepney

I do not know,
Says the great bell of Bow

Also designed by Sir Christopher Wren, St Clement Danes is in Westminster close to the Royal Courts of Justice. Far more modest than St. Paul’s, it’s a lovely little church, one of my favourites.

Not much of the old Saint Martin’s survived the Fire. It had to wait until the nineteenth century for full restoration, but was subsequently demolished, apart from the tower, which was rebuilt as the campanile to Saint Clement’s Eastcheap.

The ‘without’ here simply means that Saint Sepulchure, originally built in Saxon times, stood outside the old city walls. It is located adjacent to the central criminal court, known as the Old Bailey, named after a castle that once stood on the site. The church was dedicated to St Edmund, England’s martyr king. The old church was almost completely destroyed in 1666 and not fully restored until the late nineteenth century in the Victorian gothic style. Captain John Smith, he who was rescued by Pocahontas, was buried at Saint Sepulchure in the 1630s. The bell of the rhyme was rung to mark executions at Newgate.

Saint Leonard’s, another Saxon foundation, escaped the Fire, though it was extensively rebuilt in the 1740s after the partial collapse of the old tower earlier that century. Designed by George Dance, it’s very much in the Palladian style favoured by Sir Christopher Wren, with a high steeple mirroring that of his own foundation of Saint Mary-le-Bow in Cheapside.

One of the oldest surviving churches in the city, Saint Dunstan dates back a thousand years. The present building dates largely to the fifteenth century.

This is the church that everyone knows, the church of the Cockneys! It is also the church whose chimes are reputed to have summoned Dick Whittington to turn back to London. The ‘Bow Bells’ were also used to signal curfews. The original Saxon foundation was destroyed in 1666 and the new building, with its soaring 223-foot steeple, designed by Sir Christopher Wren. 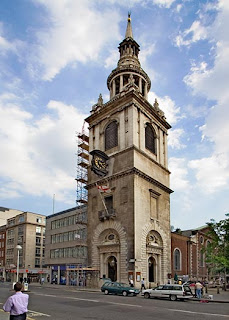 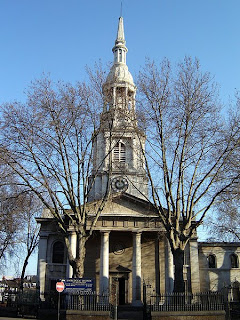 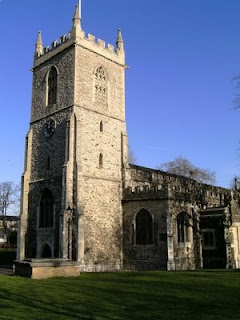 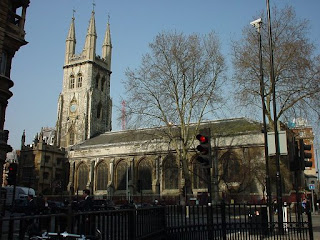 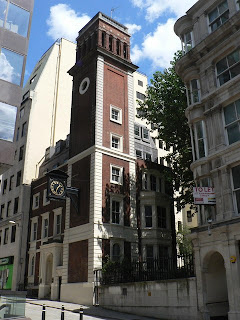 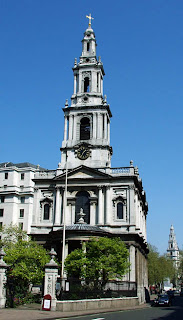