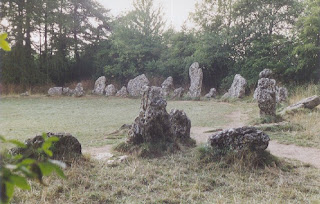 Have you ever heard of the Rollright Stones? Possibly not! Well, it’s a megalithic stone circle in Oxfordshire, England, near the villages of Little and Great Rollright. There are seventy of these stones in all in the main circle, long referred to as the King’s Men. Close by there is a smaller group known as the Whispering Knights, seemingly huddled together in conversation. There is also one lonely outsider, known as the King Stone.

The legend goes that the stones are the petrified remains of an unknown king and his invading army, turned to stone by Mother Shipton, a famous English witch and prophet. The area was long associated with the occult, and witches are said to have gathered there through the centuries. The stones are also associated with fairies and fertility rites. It is also claimed that, at certain times of the year, the stones begin to dance. I suppose they do, depending on how much one has had to drink. :-))
Posted by Anastasia F-B at 16:55