I have a fascination for paintings and graphics depicting witches or the theme of witchcraft in general. Lucas Cranach and Albrecht Dürer have both dealt with the subject, but the one who intrigues me most is Francisco Goya, who depicts witches and the Sabbath as part of his so-called Black Paintings series, completed in the latter part of his career, and intended for his eyes only. Spain was only just emerging from the trauma of the French invasion and the Wars of Napoleon, and Goya himself from a period of depression and mental illness. He had earlier in his career depicted the Devil and the Sabbath, but in an altogether lighter, almost comic fashion. There is nothing light about El aquelarre. 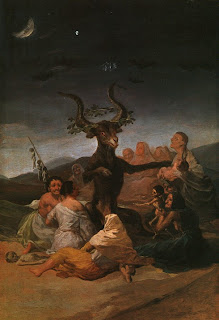