I’m completely fascinated by the story of the Wandering Jew, the man who allegedly mocked Christ on his way to the Crucifixion. He was promptly cursed, doomed to wander the earth, without rest, until the Second Coming.

The legend is most likely of ancient provenance, but it first written reference dates to the thirteenth century, to Flores Historiarum, the chronicle of Roger of Wendover, an English monk. In this he is said to have been a shoemaker by the name of Cartaphilus.

The story first made it into popular consciousness at the beginning of the seventeenth century, with the publication of a pamphlet in German. From Germany the legend spread rapidly across Europe, though the Jew in question is now known as Ahaserus. The pamphlet quotes Matthew Chapter sixteen, verse twenty-eight, which many have taken to be the source of all that followed;

Verily I say unto you, there be some standing here, which shall not taste death, till they see the Son of Man coming in his kingdom.

Wander he did, over the whole of Europe and beyond. There were reports of sightings as late as the nineteenth century. Seemingly he even made it to Salt Lake City in 1868. Perhaps he is now a Latter Day Saint? :)) 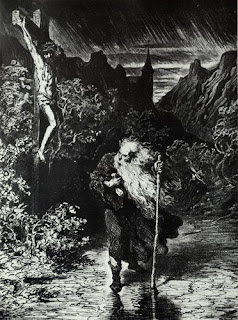