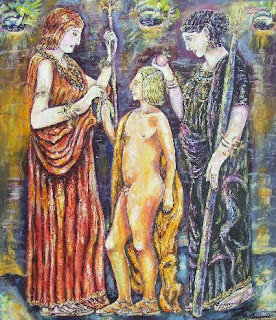 I’ve been looking into to this, the ancient celebrations in honour of Demeter, the goddess of crops and fruit, held in Eleusis in the province of Attica close to Athens. The various ceremonies, or mysteries, once drew thousands of believers, causing the temple complex to become ever grander over time.

The object of the various rites was to ensure that the participants would be well-placed in the afterlife. Over the course of a few days people would take part in religious processions and drams, take part in sacrifices, utter profanities of all sorts, undergoing a form of self-abasement, and finally purifying themselves by bathing in the seas. The most important rites, the core mysteries, were kept secret, with participants vowing never to discuss what they had experienced.

These most solemn rites were carried out at the sanctuary of Eleusis itself. Such was the authority of the goddess and her acolytes that the mysteries were preserved and we still have no clear idea what was involved. One suggestion is that involved a reenactment of the central myths surrounding Demeter and her daughter Persephone, queen of the underworld, the one symbolizing life and the other death. Ritual drinks were involved, that much we do know, which may possibly have contained some kind of opiates. After all, one of the symbols of Demeter is the opium poppy.

The whole festival concluded with dancing and feasting, the high point of which was the sacrifice of a bull. At the end libations were poured in honour of the dead.

The ceremonies continued on this basis for over a thousand years, popular also with the Romans, who identified Demeter with Ceres, their own corn goddess. It was finally brought to and end by the Emperor Theodosius, who abolished all pagan practices, as a new spirit of intolerance entered the world. But the mysteries have, in a sense, never really died, remaining an object of enduring fascination.
Posted by Anastasia F-B at 07:42