WaBenzi: Mugabe and the Destruction of Zimbabwe 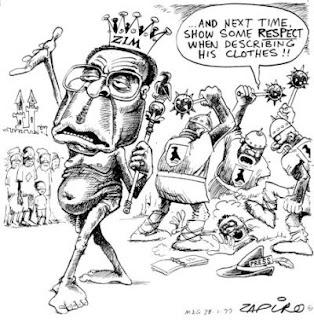 Sub-Saharan Africa is a huge place, and there are indeed tragic examples where colonial history has had the direst of consequences, economically and politically: Mozambique and Angola spring to mind, countries all but destroyed by war and civil war. However, Africa is also a great continent, with a great and energetic people, badly served by its politicians. How long are we to forward the excuse of colonialism as a justification-and it has become a justification-for backwardness and the sheer failure of potential?

Take the example, if you will, of the Republic of Ireland, which had an experience of colonialism far older and of land expropriation far more severe than the least fortunate of the African colonies. Although free for almost a hundred years now it was dominated for decades after independence by a reactionary Church hierarchy. Despite this, its transformation over the past twenty years or so into one of the most dynamic of European economies and societies is especially worthy of note, particularly when the country possesses little in the way of natural resources. I wish I could see similar signs of renaissance and resurgence in Africa; but I can not.

There is a word in Swahili which explains the plight of Africa far better than outdated notions of imperialism: it is WaBenzi, meaning boss or, better still, big shot. The WaBenzi, the undeclared tribe which crosses all borders, is, in my estimation, by far the greatest of Africa's misfortunes.

Take the example of Malawi. In 2000, following the death of Hastings Banda, the former dictatorial president, the British government increased aid to the country by some £20 million. The WaBenzi promptly celebrated by spending almost £2 million, yes, £2 million, on a fleet of 39 S-class Mercedes, in a country where the roads are hardly fit for carts.

Take one more example. In 2002 Mwai Kibaki came to power in Kenya on an anti-corruption platform, announcing that Corruption will now cease as a way of life in Kenya. The very fist law passed by the new Parliament was to increase politicians' salaries by over 170%, to about £65,000pa ($125,000). Beyond this, each MP was awarded a package of allowances, including a grant of £23,600 to buy a duty free car, all in a country where the average per capita income is £210 ($406) per annum.

I could go on like this, but it's really too depressing. You will find all of the details of these examples and more in How African leaders spend our money, an article by Aidan Hartley, published in the London edition of The Spectator in June 2005.

I have visited several African countries, and I love the people and the place. But we have to stop making excuses for failure, to stop draping history around the necks of Africans as a catch-all explanation for their perceived shortcomings. If Africa is to move forward we need to understand the real causes of failure; and these are far closer to home.

Much too much is made of the deleterious effects of imperialism in explaining the failure of many modern African states. India, Malaysia, and Singapore were all under British control, but this has not hampered the development of modern economies and mature political structures. In Africa imperialism has become a crutch, intended to explain and excuse failure. In many countries corruption has become the dominant mode of political exchange. Imperialism did not destroy Zimbabwe: Robert Mugabe did
Posted by Anastasia F-B at 00:55