Ravens of the Tower 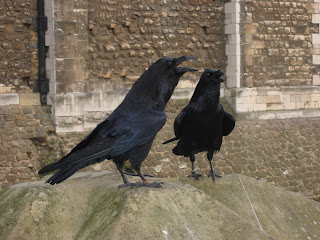 The first written reference to ravens being kept in the Tower of London dates no further back that the 1890s. If we go a little further back than that the Tower first established its place in the Gothic imagination with the publication in 1841 of The Tower of London an historical novel by Harrison Ainsworth. It included an illustration by George Cruikshank of large dark birds, possibly ravens, gathering around the scaffold erected for the execution of Lady Jane Grey. This, in turn, is likely to have been a reflection of the folk tradition that associated croaking ravens with death.

It would seem that as the popularity of the Tower began to grow the keepers decided to exploit the public's appetite for the macabre by, first, erecting a plaque in 1866 to the spot on Tower Green where the scaffold is supposed to have stood, a complete fiction, for there never was a permanent scaffold; and second, by amplifying on the raven stories.

The Tower from Within by George Younghusband, published in 1919, was the first to describe the ravens in detail. By this time the Yeomen Warders were in the practice of telling visitors that the raven used to gather at the site of the scaffold to pick at the severed heads. The earliest written reference to the legend that Britain will fall if the ravens leave the Tower dates to a letter published in the magazine Country Life in February 1955, which probably means this 'ancient' story was invented sometime during the Second World War. 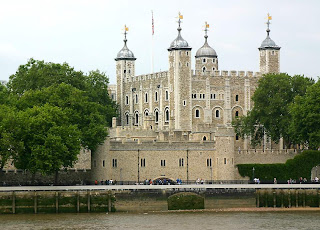