I saw Joan of Arc! 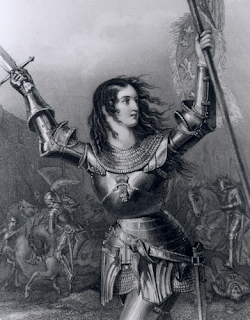 I saw Joan of Arc, yes, I did. Well, anyone can; there she is: page-boy haircut, in full armour riding through the streets of Orleans. She does so every year on 8 May, the central event of an annual festival known as the Fêtes Johanniques.

This particular day is a national holiday throughout France; but while the rest of the country may be celebrating the Liberation and the end of the Second World War in Europe, Orleans conjures up memories of an even older enemy than the Germans.

It was on 8 May 1429 that Joan, heading a French assault force, ended the English siege of the town, a key event in what came to be known as the Hundred Year’s War. The previous day she had been wounded in the attack on a fortification known as Les Tourelles. In their jubilation the English cried out that ‘The witch is dead.’ No, she was not. Joan, of course, was eventually captured and burned at the stake two years later on a charge of heresy. From witch, to heretic to saint; that was Joan’s path.
Posted by Anastasia F-B at 16:18