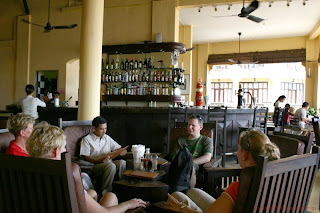 I was last in the Far East with some friends for a few weeks over the winter of 2004/5, visiting Vietnam and Cambodia.

Most of the time in Vietnam, our point of entry, was spent in Ho Chi Minh City, which almost all of the local people still call Saigon, and the surrounding countryside. We were on a boat on the Mekong Delta at the time of the Boxing Day Tsunami, not discovering what had happened until I saw a CNN report later that same day. There are so many stories and snippets of information that came out in the days that followed. One of the crassest was the report that Norodom Sihanouk, the ‘King-Father’ of Cambodia, said that his own country had been ‘saved’ by his personal intervention, I can’t remember wit whom, the Buddha possibly. A simple glance at the map will show that Cambodia was saved not by Sihanouk but by geography.

Another place we visited in Vietnam was the Ch Te not far from Saigon, where a portion of the tunnels used by the Vietcong during what is known as ‘the American War’ are preserved for visitors to explore. It’s part of a bigger war ‘theme park, which I can only describe as ‘Cong World.’ Anyway, as part of the only experience, there is a target range, where one is allowed to fire off an AK-47 at a dollar a round. I’m not at all surprised that this is the terrorist weapon of choice. It’s really easy to handle, light and with virtually no kick at all. The only problem was mine was going wide of the target, a problem with the gun, I think, because I’m a good shot.

From Vietnam we flew on to Phnom Penn in Cambodia, where we spent a few days before flying further on to Seim Reip in the north. I quickly fell in love with the Cambodians, a beautiful, friendly, almost child-like people. It’s almost impossible to believe that the horrors of the Khmer Rouge could have been perpetrated in this gentle country, but they were, yes, they were, as we saw for ourselves, visiting Toul Sleng, a school converted into a detention and torture centre, and the killing fields at Choeung Te, a major extermination centre, where people, including tiny children were hacked or clubbed to death to save the expense of a bullet. I cried when I was there, I even crossed myself, something I had not done for a long time.

On a happier note we had some fun times in the capital, linking up with all sorts of cool people, from here, there and everywhere. We ate everyday at the Foreign Correspondents’ Club-the FCC-, overlooking the convergence of the Mekong a Tonle Sap rivers. The restraint is on the upper floor with an open outlook. It was so good to sit there in the heat of the day, talking, eating and drinking. Sweet memories!

From Phnom Penn it was on to Siem Reap and the wonders of Angkor Watt and Angkor Thom. I cannot adequately explain just how marvellous these places are. We spent six days exploring, discovering wonder after wonder. I would go back, yes, I would, and do it all again.