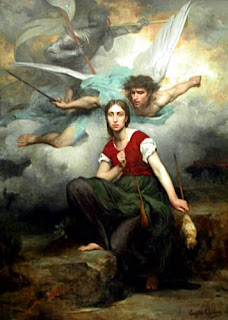 This is a contribution I made to a discussion on the difference between madness and inspiration, which also touches on the subject of Joan of Arc.

Yes, this is an interesting topic; I’m surprised I missed it up to now!

I suppose it would be possible to argue that such evaluations are determined by time and context; that what in the past might largely have been taken as some form of ‘possession’, divine or malign, is now more likely to be considered delusional. However, the division is not perhaps all that clear cut, in that people in the past were as aware of the nature of mental incapacity as they are today, although they would obviously not have used terms like schizophrenia. I suppose the point hangs on how meaningful a particular ‘revealed experience’ is to others, and how the person who has such an experience is able to relate to the wider community. There is one example that immediately springs to mind, that of Joan of Arc.

Right, first of all, I should make clear just exactly how I understand schizophrenia, what I take it to be. It involves not just hearing voices but hearing voices that are most often malign, in that the sufferer is being pushed towards ends that they do not desire and actively try to resist. It involves, moreover, a fragmentation of the personality, whereby the world is, so to speak, turned upside down: that which is real appears abstract and that which is abstract appears real. In the end there is no form of external communication, merely an interior monologue.

So, look now at Joan of Arc. She heard voices, yes, according to her the voices of Saint Catherine, Saint Margaret and Saint Michael. But these voices inspired her, inspired her to save France from the English. She was also filled with a sense of mission, of such strength that she, a seventeen year old girl, was able to convince the French nobility, the King himself, that she was divinely inspired, a remarkable enough achievement for a peasant girl in a feudal society. Quite simply, Joan, a witch to the English, inspired the French, so much so that, under her direction, the course of the Hundred Year’s War began to turn in their favour.

Was this the action of a schizophrenic? I rather think not. In the end it really does not matter if one happens to believe in the validity, or the source, of Joan’s visions; what matters is that they had a real historical effect. So, you might ask, was the rest of the community simply taken in by Joan’s ‘madness’, failing to recognise it for what it was? Ah, but you see, the French did recognise madness and the political effects of madness. The previous king, Charles VI, had descended into the deepest forms of madness, which came close to destroying the kingdom. Having fallen under one mad leader they were not very likely to rise under another.

Yes, Joan was inspired; yes her visions had a practical effect, though I myself am not prepared to speculate on the precise source of her inspiration, other than to say that witches can show power beyond imagination. :))
Posted by Anastasia F-B at 16:24