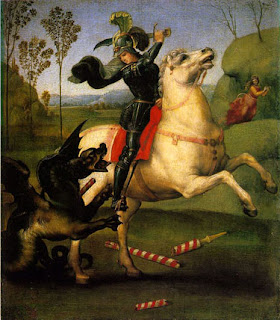 Traces of the cult of Saint George can be dated right back to Anglo-Saxon times. He appears as early as the ninth century in rituals at Durham, and in a tenth century martyrology. There is evidence, moreover, of pre-Conquest foundations dedicated to St. George: at Fordingham in Dorset, at Thetford, Southwark and Doncaster. So he was already familiar to the English well before the Crusades, though it is not until the reign of Edward III that emerges as the most important national saint, replacing Edward the Confessor. It is probably more accurate to say that the cult was identified specifically with the monarchy, rather than England as a whole. Edward I was the first king to display St. George's banner alongside those of Edmund the Martyr and St. Edward.

By the reign of Edward III he had definitely emerged as a 'god of battles', in much the same fashion as Saintiago Matamoros in Spain. In 1351 it was written "The English nation...call upon Saint George, as being their special patron, especially in war."

In this regard he was certainly more appealing than the unwarlike Confessor or St. Edmund, who had been defeated and subsequently killed by the Danes. But with the succession of Richard II George once again slipped down the ranks. Richard had little of his grandfather's warlike ambitions, and returned to the veneration of the two native saints.

George was called back to national prominence during the Wars of the Roses, when his name was invoked by both sides in the contest. It was also at this time that his cult spread across the nation at large. Almost a hundred wall paintings featuring the saint date from the fifteenth century, almost always showing him in combat with the dragon. He also survives in pilgrim badges. His secular importance was finally confirmed by the English Reformation; for he alone survived the suppression of the cult of saints, which not even the Virgin herself had been able to do.
Posted by Anastasia F-B at 17:16