The Murdered Communist and the Headless Corpse 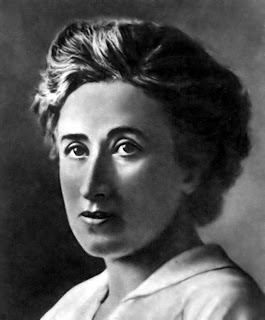 I was fascinated to discover in reading The Telegraph on Saturday that prosecutors in Germany are reexamining the case of Rosa Luxemburg, the communist leader who was murdered by the Freikorps after an abortive rising ninety years ago. It’s now being claimed that her corpse was replaced at the time with that of another woman.

Coroners from the state prosecutors’ office in Berlin are to perform an autopsy on a headless corpse found in the basement of the city’s Charité Hospital. In 1919 what was alleged to be the remains of Luxemburg was found in the Landwehr Canal, four months after it had been thrown in. There was never a positive identification and the government of the day, anxious to prevent any political fallout at a sensitive time, rushed through the investigation, putting pressure on the forensic examiner to go along with the official line.

Michael Toskos, the Charité’s head of forensic medicine, says that the 1919 corpse was the wrong dimensions for Luxemburg, going on to say that the body the hospital has fits all the right descriptions. The 1919 body was buried in Berlin’s Friedrichsfelde Cemetery, along with that of Karl Liebknecht, at a spot where left-wing pilgrims gather in commemoration every 15 January.

The issue was so historically sensitive because although Luxemburg and Liebknecht were murdered by a right wing militia it was acting on the authority of Friedrich Ebert, the Chancellor, and Gustav Noske, the Minister of Defence, both members of the mainstream SPD, the Social Democratic Party, who felt just as threatened by the extreme left. Captain Waldemar Pabst of the Freikorps' Garde-Kavallerie-Schützendivision, who gave the order for the execution, always maintained that his actions were specifically approved by Ebert and Noske. It was most certainly in their interests to have the aftermath dealt with in the most expeditious manner possible.

The question now remaining is that if the Charité corpse truly is Luxemburg who have the lefties been worshipping all these years; who is the unknown woman? We are never likely to know the answer.
Posted by Anastasia F-B at 16:22