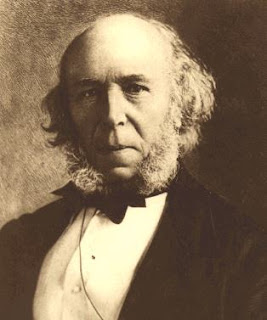 Herbert Spencer, I suppose, is another one of those Victorian antiquities, like Karl Mark, whose reputation and influence has declined steadily over the years. Both lived at a time when it was fashionable to produce a great synthetic vision, one that captured life and history in all its bewildering diversity in a convenient explanatory net; historical materialism for Marx, functionalism for Spencer. But whereas Marx looked for 'collective' solutions to the problems of the time Spencer was the apotheosis of an old Anglo-Saxon liberal tradition, one which sought to remove all artificial constraints to 'natural progress.' The measure of his importance can be gauged from his entry in the 1912 edition of the Dictionary of National Biography;

Spencer's place in the history of thought must be ranked high. His influence in the latter half of the nineteenth century was immense: indeed it has woven itself into our modern methods of thinking that its driving revolutionary energy is nearly spent; there is little likelihood of its being hereafter renewed. It was the best synthesis of knowledge of his times.

Ah, but who now reads Herbert Spencer? Not many, I think. Does he have an abiding relevance? Perhaps, particularly in concepts of laissez-faire, in his belief that state intervention in social and economic life more often makes matters worse, not better. But what of the grander vision of 'Order and Progress', who now has faith in those?
Posted by Anastasia F-B at 00:38