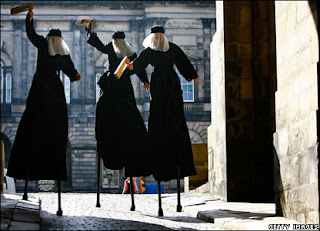 I'm in Edinburgh at the present for the Festival. The city continues hot, wet and exciting! I must say that I’m close to the point of sensory exhaustion, with one show blending in to another. I suppose there is a slight inevitability to this, considering that yesterday we went to six separate events, some in different locations, here, there and everywhere. I’ve seen some good stuff and some real bummers, but that’s to be expected, I suppose. Yea, the bummers are tiresome considering the ticket prices, so I now rely heavily on The Scotsman reviewers to point me in the right direction. Speaking of which, two of the shows we went to see have won Fringe First awards: Internal, showing at The Traverse and Crush at the Underbelly.

We booked tickets for Internal in advance, for good reason. It’s a piece of highly original and experimental theatre by Ontroerend Goed, a Belgium company, in which the audience is restricted to five people at a time. Audience? That’s not really the right word at all, because there is no sitting back and watching; this is participation, entertainment and encounter over a fairly intense half-hour in which each person is paired off with a member of the cast.

I certainly would not recommend Internal for people who are in any way shy or reserved for the simple reason that the depth of the experience, how much fun can teased out, really depends on a high degree of willingness to come out, to be as extrovert and as open as possible. Imagine a combination of therapy, interrogation and speed-dating and you are part of the way there. Be warned, though: some of the questions asked are deeply personal. It runs until the 30th of this month. I rather suspect tickets will be next to impossible to come by now. But if you are in the city try to get one. If you are anything like me you will love the experience. I had great fun, all the more so because my guy was really hot!

Crush, a play by Paul Carlton, is a much more traditional theatrical experience. It’s about a married couple in their late twenties having a kind of mid-life crisis. Yes, I know; but that’s the pace of life today. Give it another decade or so and that kind of experience will have dropped into the teens! It’s good, so well acted, with Claire Dargo as Anna and Neil Grainger as Sam, but also, I suppose, a little dispiriting; I found it dispiriting. It reminded me to some degree, although on an entirely different level, of Revolutionary Road, the movie with Kate Winslet and Leonardo DiCaprio which I saw earlier this year. I made the resolution then that I would never, ever marry, never invest my life in disappointment and routine.

I’ll be here until the middle of next week, catching what I can. What I did catch walking on my own down the Royal Mile a couple of days ago, or, better said, what caught me, was a rather fierce-looking local lad who said something completely incomprehensible to me. I had to ask him to repeat himself but it still wasn’t easy. Amongst other things I picked up what sounded like Udd…taee ghee yaw a shuug. No translation is necessary: I think I can guess. :-))

Oh, a small postscript about the city itself, thoughts brought on by reading Alan Cochrane’s article in the Scottish edition of The Daily Telegraph. Edinburgh is a beautiful and romantic place, especially the Old Town. It would be a nice place to live, to get away from the madness of London. Unfortunately the local council here has gone mad, beginning tram works that nobody seemingly wanted. It’s another Scottish Parliament story: the project is late and millions of pounds over-budget. What’s worse Princes Street, the main thoroughfare lodged between the Old and New towns is a complete mess, dug up from end to end. It’s expected to remain like this for months. It’s such a pity. :-( 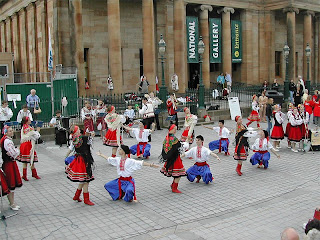