Was Enoch Powell a Racist? 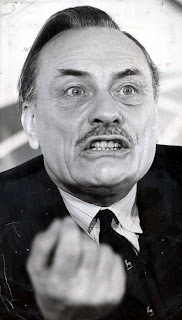 I addressed myself in debate to this particular question. Here, below, is the answer I gave.

No, I do not think he was a racist. He was, rather, an angry man; angry at his party and angry at the leadership. His anger, his alienation, it is probably better to say, took him down a dangerous road, a road marked by insensitivity and misjudgement

The essential point to note was that the Rivers of Blood speech had the immediate effect of turning Powell into a kind of folk hero, even as he was being cast into the wilderness by the then leadership of the Conservative Party. London Dockers marched on Parliament to demonstrate their support, as workers in Wolverhampton and the Black Country demanded his reinstatement. Opinion polls taken at the time gave him an approval rating in excess of 70 per cent. He also received thousands of letters of support.

So, as far as race relations in the late 1960s are concerned, the picture revealed is not very attractive. On the basis if the measures I have given, one has to conclude that most of the British people harboured some form of racial prejudice. Powell did not create this; he simply gave shape and direction to underlying emotions, feelings that had slowly been building up ever since the arrival of The Empire Windrush from Jamaica twenty years before, beginning the first wave of post-war black immigration to England. At the time Labour back-benchers wrote to Prime Minister Clement Atlee, saying that "an influx of coloured people would cause discord and unhappiness among all concerned." By the late 1950s, with the rate of arrivals averaging 50,000 a year, this 'discord and unhappiness' achieved open expression in the Notting Hill race riots.

Although racism at this time was probably best explained as a kind of post-imperial hangover, it took on new and more worrying forms in the 1960s, the time just prior to Powell's speech. In sociological terms it was also becoming a largely working-class and, indeed, a regional phenomenon. There were two basic reasons for this. There was a large constituency of people, former Labour voters in the main, concentrated for the most part in the West Midlands, Powell's own political hunting ground, who felt they were being increasingly neglected by the government of Harold Wilson. This was the area, moreover, where black immigration was heaviest, leading to competition for housing and jobs. During one particularly notorious by-election for the Smethwick constituency, the successful candidate, Peter Griffiths, beat Patrick Gordon Walker, a senior Labour politician, by, amongst other things, the distribution of the most scurrilous forms of campaign literature, including one leaflet saying "Vote Labour for more nigger-type neighbours." This key event in British electoral politics showed that black immigrants had become scapegoats for more deep-rooted social ills. It really only needed the 'Rivers of Blood' to turn this from a local into a national phenomenon.

Racism is still with us; it will always be with us. But so much has changed since 1968. In general people are much more accepting; open discrimination is disallowed by law and black people are to be found at all levels of public life. There have been tragedies, there has been violence; but Powell was a poor profit. The Tiber is not foaming with much blood, and is never likely to.
Posted by Anastasia F-B at 16:52