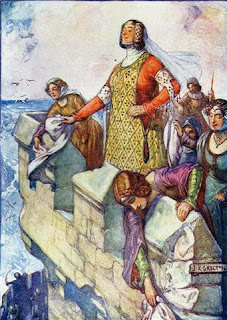 This is a wonderful story from the old struggles between Scotland and England in the fourteenth century, one which deserves to be better known. It concerns Agnes, countess of Dunbar who, because of her dark complexion, is known to history as Black Agnes. It was she who was left in charge of Dunbar Castle on the coast of south-east Scotland while her husband was campaigning with the main Scottish field army.

Agnes’ test came in January 1338, when Dunbar was approached by a sizeable English force of some 4000 men, commanded by William Montague, Earl of Salisbury, and Richard Fitzalen, Earl of Arundel, well equipped with siege engines shipped from the nearby port of Berwick. Agnes was only able to muster some 40 retainers for the defence. Even so she refused to surrender. Under bombardment her defiance continued week after week, month after month. It is even said that she appeared in person after an assault in an act of personal defiance. According to the "Chronicle of Pluscarden":

She indeed laughed at the English and would, in the sight of all, wipe with the most beautiful cloth the spot where the stone from the engine hit the castle wall.

The English commanders produced her brother, John Randolph, Earl of Moray, who had been taken captive some time before, saying that he would be executed if Agnes did not surrender. She simply called the bluff, telling them that the earldom would then fall to her. Moray was sent back to prison unharmed. When the English army began to run short of supplies Agnes sent Salisbury and Arundel a mocking gift of bread and wine. Frustrated in every move, the English finally raised the siege in early June. The whole episode was neatly summarised by one of the chronicles;

She kept a stir in tower and trench,
That brawling, boisterous Scottish wench,
Came I early, came I late
I found Agnes at the gate. 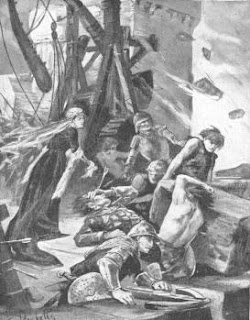