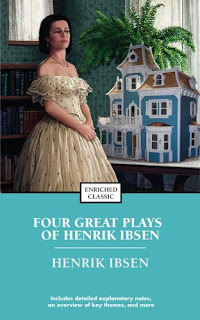 Henrik Ibsen's A Doll's House is a wonderful play, cutting, with great economy of words, through the lies and hypocrisy of a Victorian marriage. I saw it performed in London last autumn and made some notes afterwards;

a) Christina and Nils were forced apart by circumstances, chiefly economic circumstances, although the never ceased to be attracted one to the other. In order to support her mother and brothers, Christina entered into a loveless marriage. Now her husband is dead she has come to town, not just to look for employment, but to make contact with the lover of her youth. Here one needs to pay particular attention to their conversation in Act Three, where she tells Nils that they are both castaways clinging to the wreck of their lives, and they should join forces because they need each other. For Nils this turns into a moment of recognition and reformation. His former absence of morals, his opportunism and his cynicism, were all born out of disappointment and anger at having lost Christina in the first place.

b) Christina has come to understand that that the Helmers' marriage cannot continue on the basis of lies and deception, and that Nils' letter will provide the necessary catharsis. Remember what she says to Nils: "...it's quite incredible the things I've witnessed in this house in the last twenty-four hours. Helmer must know everything. This unhappy secret must come out. Those two must have the whole thing out between them. All this secrecy and deception, it just can't go on."

c) Christina's epiphany, her moment of revelation, is the key dramatic moment in the whole play. She has been considering killing herself to avoid bringing disgrace on her husband, though all of her sacrifices and her deceptions, the way in which she obtained the loan in the first place, were solely for his benefit. She is convinced that Torvald loves her enough to be prepared to make his own sacrifice; to reject Nils attempts at blackmail; to make things public and take the whole blame on himself. After all, did he not just say before reading the letter "...I wish you were threatened by some terrible danger so I could risk everything, body and soul, for your sake." But he does not; he proposes to give in, while continuing to blame Nora, even saying that she will not be allowed to bring up her own children.

Now she knows the truth. At that point she begins to stop loving Torvald. Any residual feeling is killed by his feelings of relief when Nils returns the IOU; his assumption that things can now return as they were; that Nora will once again become his 'little song bird.' She tells him that is impossible, that she has been treated for too long as a plaything, living in a Doll's House. In those crucial moments she growns up and beyond Nils and their sham marriage, breaking the confines and restrictions of her Doll's House forever. She is free.
Posted by Anastasia F-B at 16:40